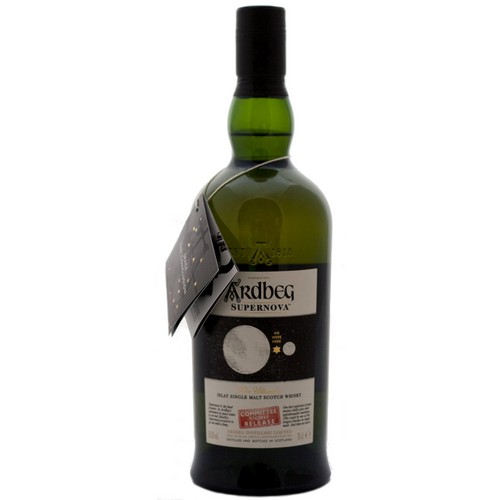 By now you have probably had your fill of news about how Ardbeg sent some whisky into space and how it became a magical superspirit after three years in microgravity. 2015’s Supernova bottling — Ardbeg’s mega-peated expression — is being released in honor of these findings. (Remember: There is no actual space whisky in the bottle.) What you might have missed amongst the hubbub is that SN2015 is the final release of Supernova. I don’t know if that really means there will never be another Supernova release (distilleries are awful about that whole “never say never” thing), but for now, it’s your last chance to get your mitts on this heavily peated and highly coveted spirit.

There’s no real production information provided for this year’s whisky, so let’s just dive in.

On the nose, peat smoke starts things off as expected, but with an undercurrent of maple syrup and orange marmalade. As with most Supernova releases, the body is composed of a mix of pungent smoke, iodine and sea spray, and preserved fruits. The finish evokes bacon and some chocolate notes.

For 2015 the overall level of sweetness is in regimented, pacing the smokiness of the whisky step for step. Despite the 100ppm of phenols, it’s not a peaty blowout, nor is it sherried into oblivion. All told, it comes across not unlike any number of highly peated whiskies on the market  — well crafted and full of flavor, but ultimately short on uniqueness to the point of vague anonymity.

Can it be that after all these years, Supernova will not go out with an interstellar bang as promised — but will rather simply fade away?