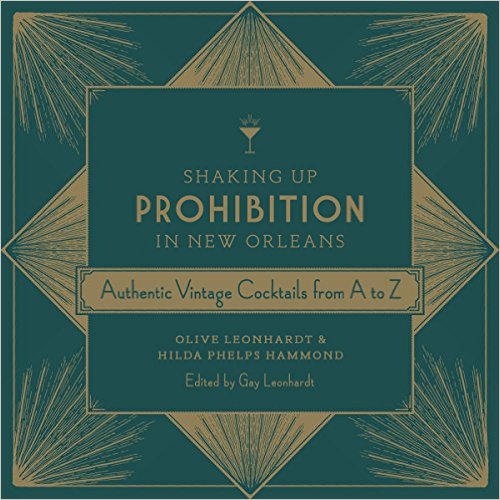 Shaking Up Prohibition in New Orleans: Authentic Vintage Cocktails from A to Z is a cocktail book that needs significant introduction to be understood. Written in the 1920s by two New Orleans suffragettes, Olive Leonhardt and Hilda Hammond, the manuscript was recently unearthed by Gay Leonhardt, a descendant of Olive’s.

The book is tied to the alphabet, with sections running A to Z, as promised by the title. Each section features an illustration themed to each letter (drawn by Olive), a similarly letter-centric poem (written by Hilda), and cocktail recipes of the era also alphabetically tied. As there are only so many letters in the alphabet, this makes for quite a slim tome, but it’s fun to read nonetheless.

How much you enjoy the book will be determined by your taste for poetry and for (very) classic cocktails. Drinks in the 1920s tended toward the simple (Black Jack: 1/2 creme de menthe, 1/2 cognac) and the tongue in cheek (the Hydropot Exterminator includes arsenic). And any reader who sends us a writeup and photo of them drinking the Slow Motion (1 pint moonshine, 1/2 pint cream, 2 egg whites, 1 tbsp Grenadine, plus seltzer) will earn my undying admiration.

Shaking Up Prohibition in New Orleans is unlikely to become a significant encyclopedia to aid in your imbibing, but it is a fun look into the zeitgeist of the time — all devil may care good times despite the yoke of Prohibition and the nation’s Depression. Nothing can keep a party girl down, I guess!

Shaking Up Prohibition in New Orleans