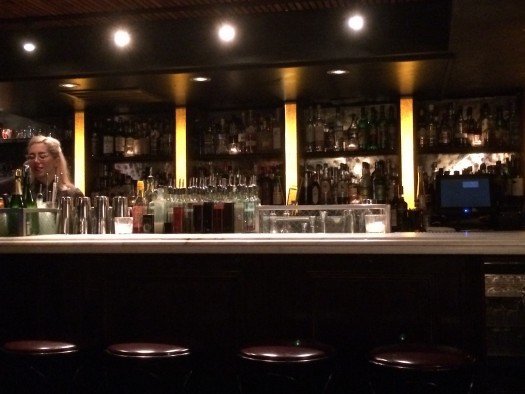 Philadelphia isn’t exactly known as a hotspot for craft cocktails, but those of discriminating tastes do know at least one spot to go for elevated libations: The Franklin Mortgage & Investment Co., a cheeky name for an underground bar and seemingly one of the only drinking establishments in Philly that doesn’t have a TV.

I’ve had craft cocktails all over the country, but I have to say the tasting menu at The Franklin is one of the most interesting and avant-garde cocktail experiences I’ve ever encountered. Head bartender Sara Justice (at left, above) keeps things unique and fascinating — yet she avoids the trap of turning your cocktail into, say, a puff of smoke that you inhale.

Recently I had the pleasure to enjoy Justice’s “Thaw” menu, which had been created as a nod toward winter’s turning to spring. I was catching Thaw on the tail end of its seasonality — summer was in full effect in Philly as the temperature outside hit 93 during my visit — and The Franklin noted that a new summer menu was in the works (and probably available by the time you read this).

Thaw is a five-course tasting menu of cocktails, not including various amuses and surprises sent out from the bar. For example, we started off with a homemade cucumber soda — slightly sweet, slightly green — before diving into a spin on the hot toddy called It Begins With a Seed: tequila, mezcal, malva flower, and a sunflower seed syrup… quite a smoky/herbal/warming experience and welcome even on a hot day.

One big highlight of the menu came with drink #2, Sweater Weather, a complex concoction comprising Elijah Craig 12 Year Old bourbon, a ton of Peychaud’s Bitters, fennel, and a grapefruit syrup which is topped off with a whipped Earl Grey tea honey. The presentation alone is dazzling, but the layers of flavor in the drink really elevate it into something special.

A clear crowd-pleaser comes with the fourth drink, Berry Patch, which adds Barbados rum, strawberry syrup, wheat berry syrup, cream, and egg white, plus a sprinkle of nutmeg. The drink is meant to recreate all the flavors in a strawberry shortcake — and it does, perfectly, right down to the cake. As a “dealer’s choice” cocktail, Justice sent out a drink called What Life Hands You — a liquid version of lemon meringue pie that included a graham cracker syrup made from the real thing.

All the drinks served at this establishment were worthwhile, and it was hard to believe that the bar has only been around for six years — making it the oldest craft cocktail joint in town. At $65, the price may sound steep, but considering the time and ingredients (and ingenuity) that goes into some of these libations, I am sure any true cocktail fan will find that to be money well spent. Go now!