Gin Rated A- Rated B+ Reviews

Based in Smyrna, Delaware and founded only four years ago, Painted Stave Distilling is an artisan craft distiller that is dipping its toe into all manner of spirits. For now Painted Stave has a collection of white spirits in production, with aged offerings en route. Today we’re looking at two products, Candy Manor Gin — the company’s year-round release — and South River (Red) Gin — part of its experimental, avant garde spirit collection.

Painted Stave Distilling Candy Manor Gin – Described by Painted Stave as a “Western style dry gin with strong noted of lavender, sweet goldenrod and lemon-balm to compliment traditional flavors from juniper, coriander, angelica, and orris root.” The nose is a blend of something old and something new — fresh juniper and some earthier coriander, but also floral notes that approximate honeysuckle, iris, and jasmine. I’m not altogether familiar with goldenrod, but I would have expected more of a lavender note than I could sniff out here. The body plays up those florals quite a bit, coming off as almost perfumed with all the delicate botanical elements. Up front it’s a candied, mixed bouquet of flowers, then behind that builds more sweetness — almost chalky in texture. The finish hints at citrus, pine needles, mushroom, and a touch of baking spice. Initially a little scattered, I came to quite enjoy its bracing complexity in the end. 80 proof. B+ / $30 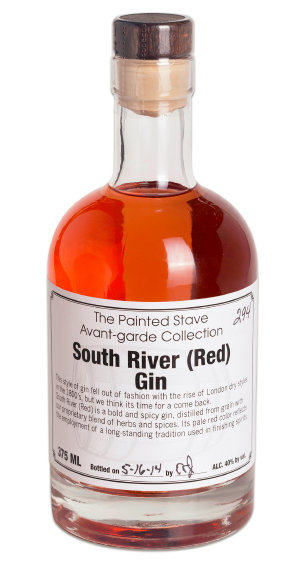 Painted Stave South River (Red) Gin – This is a limited-edition “juniper-forward” gin that is aged for 5 months in former red wine barrels. (There’s also a South River (White).) It’s closer to pink than red, but who’s fact-checking? The nose is quite sharp, loaded with notes of pine tar, vanilla, and Vicks VapoRub. The body is initially fiery, with more of that menthol note, but it slowly settles into a more seductive groove. Intriguing notes of chocolate and caramel, licorice, and some slight rhubarb notes all bubble up as it develops. Really quite unexpected and enchanting, and the reddish hue makes it quite a conversation piece. 80 proof. Bottled 5/16/14. A- / $22 (375ml)