On the Spanish island of Menorca, they make gin. Have been, since 1708. Also known under the brand name of Xoriguer (say it five times fast), Mahon Gin — aka Gin de Mahon — is one of the only gins in the world (alongside Plymouth Gin; update — Plymouth is no longer geographically protected, whoops!) to have a specific geographic designation. “Mahon Gin” will be the worldwide brand name going forward, so look for it under that label.

Gin got its start on this Mediterranean island back when it was a British colony. Given it was a popular waystation for sailors, all the more reason to crank out the juice. Under Spain’s ownership (which became formal in the late 1700s), gin continued to be produced here, and now it’s going global after just 300 years.

Mahon is distilled from grapes in small copper pot stills and is flavored with juniper and other, undisclosed herbs. It is also rested in American oak barrels (neutral, I presume) before bottling.

This is a pretty and very simple gin, but it’s not without some serious charms. The nose is driven by juniper, but not in a heavy-handed way. Fresh pine mingles with some earthier notes — coriander, I’m guessing — plus a slightly soapy character underneath it. On the palate, it’s very gentle, offering more fresh juniper, some lemon peel notes, a touch of sea salt, and some more of those earthier, almost nutty elements, on the back. The finish is clean and just ever so bittersweet, with a slight hint of cinnamon and chocolate lingering on the back of the throat.

That all sounds more complicated than Mahon really is — which is a simple and versatile spirit with lots to recommend about it. Try it in just about any gin-based concoction you can come up with. 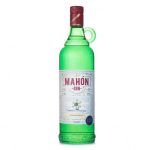