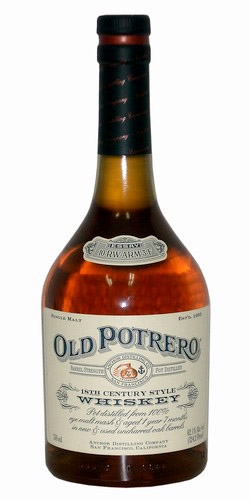 Old Potrero is the craft distilling arm of San Francisco-based Anchor Distilling, and in addition to a number of gin and unaged whiskey products, it also produces a handful of aged spirits under the OP label.

Today we look at two extreme oddities, both made 100% malted rye, which means the rye has been partially germinated in the same way that malted barley, the key ingredient of single malt Scotch whisky, is made. Malting rye is hardly common, and that’s hardly the only trick up OP’s sleeve when it comes to producing these two spirits. It has also been pointed out that both of these whiskeys are technically “single malts,” though neither is what you would expect from the phrase.

Old Potrero 18th Century Style Whiskey – This is a 100% malted rye whiskey that is aged for 2 1/2 years in barrels that are not charred — by far the standard in American whiskey — but are rather merely toasted. Both new and used barrels are incorporated into the production process. It’s extremely unusual from the choice of grain to the exotic barrel program, and it shows in the finished product. At heart this is a young spirit, racy on the nose with raw wood, raw grain, and a bit of hospital character. The body is almost astringent — so much wood character has leeched into this spirit that it’s drained of just about everything else. There’s a little bit of peppery rye up front, but this fades to a fiery, almost smoky, medicinal character in the finish. It’s, sadly, difficult to really dig into. 102.4 proof. C / $65 [BUY IT NOW FROM CASKERS] [BUY IT NOW FROM DRIZLY]

Old Potrero Single Malt Straight Rye – This is another 100% malted rye whiskey, but it’s aged for 3 1/2 years in traditionally charred oak barrels. Often referred to as Old Potrero’s “19th Century Style Whiskey,” it has a more modern construction to it altogether. The nose offers the cereal character of many a craft whiskey, though there’s plenty of the medicinal funk of the 18th Century Style to go around. The palate is initially tempered nicely with sweetness — butterscotch and toffee — but this fades to a more breakfast cereal character within a few seconds. The finish brings up more of those pungent wood notes, and a modest amount of menthol-laden medicinal character, but again it hints at some caramel and coffee character from time to time that elevates the drinking experience to something much more intriguing. Released seasonally with a fluctuating alcohol level, the expression we reviewed (there’s no vintage/batch or other identifying information on my sample bottle) is bottled at 90 proof. B / $70 [BUY IT NOW FROM CASKERS] [BUY IT NOW FROM DRIZLY]