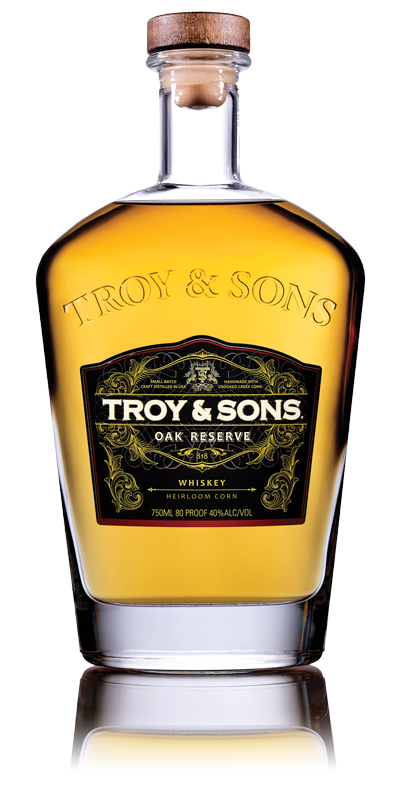 Asheville Distilling Company in North Carolina is behind the Troy & Sons brand, but there really is a Troy: Troy Ball, who happens to be a woman. She indeed has three sons.

This craft distillery is heavily focused on corn whiskey/moonshine, and relies on heirloom grains for all its distillate. To date the company has three products, two all-corn whiskeys and one wheat/corn whiskey called Blonde. All are 80 proof. Thoughts follow.

Troy & Sons Platinum Whiskey Heirloom Moonshine – Made from Crooked Creek heirloom white corn, cut with Appalachian spring water. Classic corn on the nose, with strong petroleum overtones. The body is gentler than you’d think, heavy on the popcorn but tempered with easy sweetness, some mushroom notes, green pepper, and a bit of raw ginger on the finish. Fairly typical of today’s “craft” moonshines, but not without quite a bit of charm. B / $30 [BUY IT NOW FROM DRIZLY]

Troy & Sons Oak Reserve Whiskey Heirloom Moonshine – Per the company, this is not entirely whiskey but rather “aged moonshine,” rested in ex-bourbon barrels for an indeterminate time, but long enough to give it a classic whiskey coloration. There’s a strong pungency on the nose — raw wood, vanilla extract, and licorice — but as with Platinum, the body belies a simpler, more gentle construction. Easy cereal notes and some licorice ultimately lead to lots of tannic astringency as the more raw flavors from the wood barrel come forth on the finish. B- / $35 [BUY IT NOW FROM DRIZLY]

Blonde Whiskey – Not bottled under the Troy & Sons label, but rather, in the fine print, under the Asheville Distilling banner. Made from a blend of heirloom Turkey red wheat and its white corn, Asheville claims to take very precise cuts of its distillate so that only the purest whiskey goes into barrel. The whiskey is then aged in barrels made with “honeycomb-laced staves,” time unstated. The avowed goal of Blonde is to create a whiskey “without bite or burn,” but some might ask, “What’s the point of that?” Either way, what Asheville has done is craft a whiskey that is loaded with grain character but balanced by more traditional American whiskey notes — baking spices, vanilla, and gingerbread. The finish is much less oppressive than the Oak Reserve reviewed above, but it’s still a few solid years of barrel time away from true maturity. B / $40 [BUY IT NOW FROM DRIZLY]