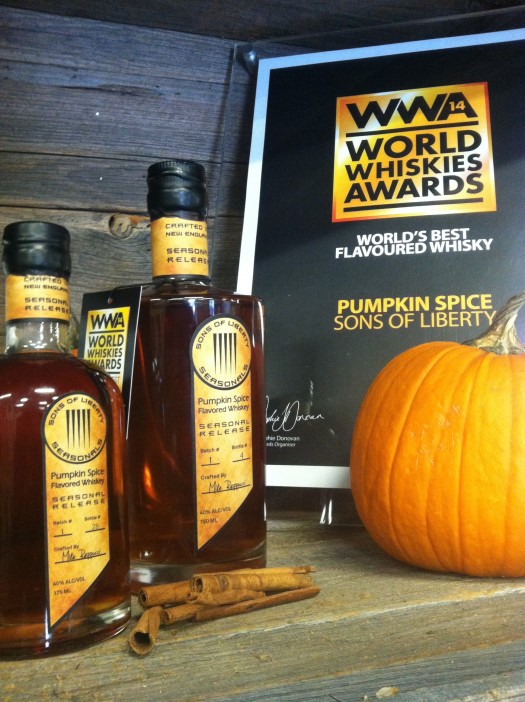 Pumpkin spice apparently knows no bounds. Now here it is, in our whiskey!

Sons of Liberty is a craft distiller out of Rhode Island, focusing on American single malts as well as seasonal, flavored whiskies. In addition to a hop-flavored whiskey there’s this pumpkin one, which is focused on fall.

The base of the spirit is SoL’s single malt, a young NAS spirit, which is flavored with juice made from thousands of pounds of roasted, pressed pumpkins, plus a touch of traditional holiday spices — cloves, allspice, cinnamon, vanilla, and orange. When bottled, it is a deep, reddish brown, the color of very old brandy.

If you’re expecting a Starbucks-class sugar bomb, walk away. This is not a sweetened whiskey, but is quite literally a blend of young American malt with actual pumpkin juice and a bit of stuff from the spice rack. The nose is coffeelike, with a dusting of cloves, tea leaf, tobacco (cigars, really), and roasted grains. The pumpkin is much more evident on the body, where roasted gourds make a distinct — and unique — appearance. The combination of pure pumpkin and young whiskey makes for a bizarre experience in the mouth, with those vegetal squash notes waging war with brash, young malt character. Cinnamon comes along at the end, but it’s that coffee note that hits hardest on the finish, making for a reprise that feels a lot like you’re scooping out the dregs of the coffee maker at the office and taking a big bite out of sludge that’s in there.

This is an overwhelming style of whiskey but it’s wholly unique and worth experiencing, even if just to experience once what a madman can do with a copper still and a few tons of holiday squash.