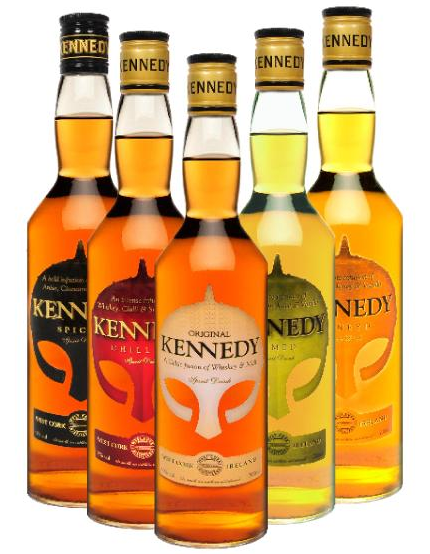 Irish whiskey is all the rage right now — it’s the fastest growing spirit category there is — and there’s a mad rush going on in Ireland to build stills, increase production, and otherwise squeeze every dollar out of this market before everyone moves on to something else, probably rum.

Kennedy is a new launch of Irish Whiskey — er, “Spirit Drink.” I’m still trying to sort all this out, so bear with me. Here’s how the Kennedy label breaks out.

Upon a sticker stylized like an old Celtic helmet it reads KENNEDY in big letters, then ORIGINAL underneath. In delicate italics beneath that: Spirit Drink. Then in even smaller italics: “Oak Filtered & Hand Crafted using.” Then, larger block letters: “Whiskey with natural flavor & caramel.”

OK, so points for truth in labeling, I think, but points off for confusing the hell out of your consumer along the way. What is “oak filtered,” exactly? Check the back label and you’ll see that “Kennedy’s Spirit is a delicate fusion of the finest Celtic whiskies and malt to insure a unique, challenging and august drinking experience. Kennedy’s Spirit, handcrafted in West Cord, Ireland, is infused with Irish and Bourbon oak using a proprietary infusion process and steeped in malt through an artisan and near-forgotten technique.”

And that’s just the “original.” There are four flavored versions of the spirit available, too. Or, rather, more flavored.

So, with that out of the way, let’s taste them all!

Kennedy Original Irish Whiskey – A slight sugar character on the nose, with a malty, cereal character to it. Touches of honey and cinnamon dust the body, which is otherwise a soft caramel, lightly woody, mostly watery character to it. The overall impact is one of Irish whiskey that’s already been liberally doused with water. It goes down easy enough, but the finish is weak and a touch astringent, leaving behind a touch of hospital character as it fades. 80 proof. C+ [BUY IT NOW FROM DRIZLY]

Kennedy Spiced Irish Whiskey – Infused with visible, solid spices (including anise and cinnamon) floating around in the bottle. Tons of cinnamon on the nose. The body has an essence more akin to vanilla blended with dried apples — with that anise making a strong showing as a somewhat weird secondary note. I would have dropped the licorice components and pumped up the cloves, but that’s just me. At least there’s more going on here, even if it doesn’t come together the way you might hope. 70 proof. B- [BUY IT NOW FROM DRIZLY]

Kennedy Honeyed Irish Whiskey – Infused with vanilla and honey. Contains visible, fine sediment (but not big chunks like in the Spiced expression). It’s more hazelnut than honey on the nose, but the finish builds to more of an earthy honey character. Minimal whiskey character, though. 70 proof. B- [BUY IT NOW FROM DRIZLY]

Kennedy Limed Irish Whiskey – Green, lime whiskey? Why not. Again, light sediment from flavoring involving vanilla and lime juice. Not as bad as you are expecting, but a bit like drinking a slug of Rose’s Lime Juice straight. Sweeter than most of the other whiskeys in this lineup, a necessity to offset the sour lime flavors. The color is beyond off-putting. Clearly this is designed exclusively as a mixer… but with what? When the label copy calls the product “intiguing,” you know something ain’t right. C-

Kennedy Chilied Irish Whiskey – Bright red, it is flavored with chili pepper and paprika(!). Wow, this is intensely hot — far hotter than your typical “pepper vodka.” I can see this doing brisk business as frat kids make bets with each other and buy shots to dare each other to drink. It’s a fiery, habanero-style burn that singes the lips and sticks in the throat for minutes. A hint of honey sweetness helps temper the burn. Discriminating it ain’t, but daredevils should go for it. B