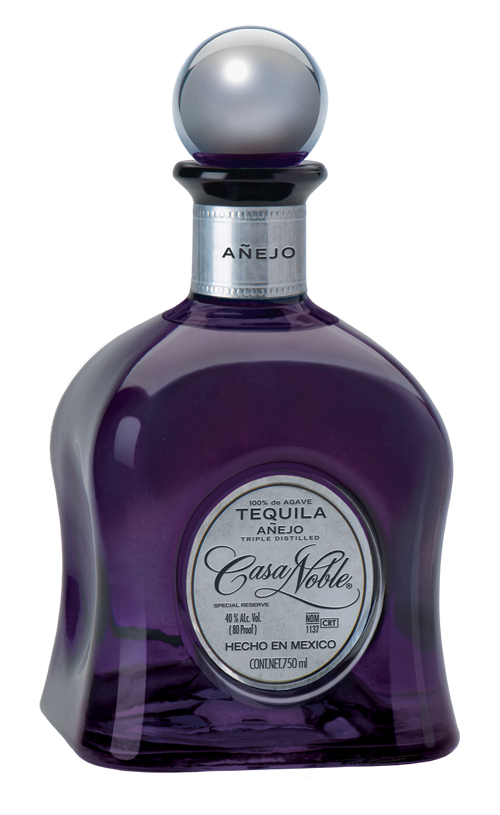 From time to time we like to revisit spirits we’ve spent time with in the past. Management changes. Production practices change. Formulations change. Climate changes. And stuff varies from bottle to bottle even when none of the above changes. Sometimes our reviews are identical. Sometimes they’re wildly different.

Today we look again at Casa Noble, a venerable ultra-premium tequila line that we last reviewed in 2009. Very little seems to have changed on Casa Noble’s end, and from my perspective, very little has changed too. My ratings are all the same, with one slight (yet watershed) upgrade for the masterful anejo.

You’ll note some slight packaging changes (the reposado bottle is no longer blue but is now clear; the anejo is still in its distinctive purple bottle), but otherwise I expect nothing much has been altered behind the scenes of these three tequilas. (Amazingly, prices seem to have fallen a bit in the last few years!) All are of course 100% agave and all are 80 proof.

Casa Noble Crystal Tequila (Blanco) (2014) – Pungent on the nose, with deep, deep agave notes, white pepper, and cayenne. The body isn’t nearly the agave bomb you might be expecting. It is both sweet and peppery, but not really vegetal at all. Instead you’ll find notes of tart lemon juice, caramel sauce, and a touch of rhubarb. Very well crafted. Everything a blanco should be. A / $35 [BUY IT NOW FROM CASKERS]

Casa Noble Reposado Tequila (2014) – Spends 364 days in French white oak, making this a very well-aged reposado. The nose has that trademark peppery pungency of the blanco, but with an undercurrent of stone fruit — peaches and apricots — to give it some balance. The body is very fruity, slight tropical notes atop lemon and oranges, plus notes of chocolate peppermints and ample wood-driven vanilla. It doesn’t drink nearly as leathery and “old” as my prior comments indicated, but perhaps that’s just my increased experience with tequila over the last five years talking. Still delightful, either way. A / $45 [BUY IT NOW FROM CASKERS]

Casa Noble Anejo Tequila (2014) – Aged “to perfection” for two years in French white oak. Nicely dark, but not overdone. That peppery agave is still front and center on the nose, with more of a caramel/marshmallow character attempting to overtake it. The body shows that it’s a silky dessert sipper all the way. The palate starts with bittersweet chocolate and graham crackers, then hops to burnt caramel and dark brown sugar notes. The fruit is absent save for a little flamed orange peel, which plays nice with the molten chocolate cake character that bubbles on and on on the finish. A benchmark anejo that mixes a racy attack with a silky sweet finish. A+ / $50 [BUY IT NOW FROM CASKERS]