Isle of Arran-based Arran keeps pumping out special releases, with these two new offerings now hitting the market. Thoughts on both follow.

The Arran Malt 17 Years Old – A limited edition bottling, fully matured in ex-sherry casks, this is the second release in a trilogy of single malts leading up to what will be Arran’s first ever official 18 year old expression. Enchanting from the start, with a nose that offers a rich nougat character and ample aged/burnt orange notes. The body folds together those nicely roasted grains with the sherry core in a beautiful way. At 46% abv it’s a touch on the hot side, and a few scant drops of water really helps to open things up and settle down some of the whisky’s more fiery notes. As the spirit opens up, some nice chocolate notes begin to develop, particularly on the finish, alongside notes of cola, sea salt, and marshmallow. A really fun whisky that I easily recommend. 9,000 bottles produced. 92 proof. A / $95  [BUY IT NOW FROM CASKERS] 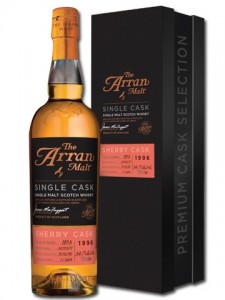 The Arran Malt Premium Sherry Cask 1997 – Arran had a version of this whisky from the 1996 vintage, now it’s “back in stock” with another one: Again, it’s a cask-strength single cask release, only this time it’s 17 years old, fully matured in a sherry cask (much like the 17 year old reviewed above). This whisky initially presents a lot like the 17 Year Old, but the extra alcohol pumps up the orange character even further, sending the more cereal characteristics into the background. Pure, tart tangerine and orange oil invades the nose and the tongue, with notes of black pepper, cardamom, incense, and toasted marshmallow coming up behind. This is an interesting foil to the 17 Year, offering a lot of similarities but just enough differences to make for a fun side-by-side comparison. Reviewed: Cask #217 (562 bottles produced from this cask). 106.4 proof. A / $125 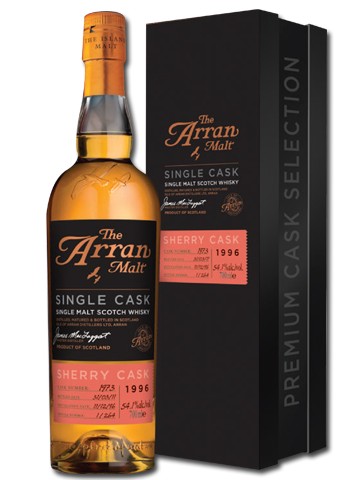