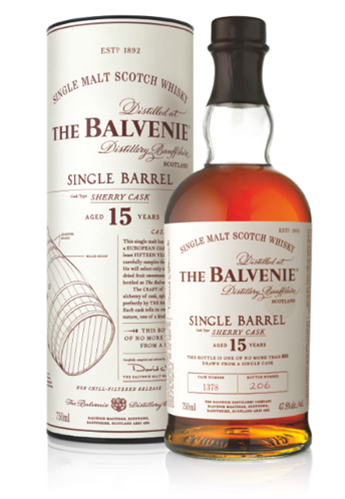 The latest release from Balvenie is this 15 year old expression which has spent its entire life in former sherry casks. It is also a rare single cask release (Balvenie is the only distillery that has an ongoing single cask release of a single age as a part of its range), so you’ll find variation from bottle to bottle. How much variation? We were lucky enough to try this spirit drawn from two different casks — adjacent ones, in fact. The results might surprise you. Read on.

The Balvenie Single Barrel Sherry Cask 15 Years Old Cask #4450 – Great balance on this, with supple notes of cinnamon-raisin oatmeal mixing with vibrant citrus notes. The body amps that up further, lending butterscotch and flamed orange peel notes to an already rich and vibrant whisky. This whisky is firing on all cylinders, and as it continues to open up it starts to show gentle smoke notes, a touch of iodine, and a return of roasted grain character (think really good pretzels). The sherry’s what sticks with you the most, however, hanging on for an epic finish. A

The Balvenie Single Barrel Sherry Cask 15 Years Old Cask #4451 – A surprising degree of grain character here, infused with nougat and bitter orange peel. This doesn’t feel like a whisky that’s spent a full 15 years in sherry casks, the wood having more of an impact than you’d expect. The finish is drying, with emerging notes of seaweed and iodine, hemp twine and dusky roots. Interesting but flat, a whisky where the fruit is pulled back a bit too far for a whisky that wears its sherry cask heritage on its sleeve. B