Following in the footsteps of Duke bourbon and Jack Daniels’ Sinatra Select, we now have Bogart gin. We’ll skip the obvious “gin joints” joke to be made here, but we’ll just say it’s being made with the blessing of the Bogart estate, and should arrive later this year. No word yet on the long-awaited Sammy Davis Jr. Manischewitz or the Peter Lawrence Cotton Candy Vodka. [NY Daily News]

And finally today: Shortie, the Jack Russell which serves as the distillery mascot for Ardbeg, has been commemorated in his very own crop circle in northwest England (Cheshire) as a thank you to the astronauts aboard the international space station. The scientists have been conducting a series of events involving zero gravity maturation, with samples of Ardbeg orbiting in the heavens since Fall 2011. The experiment is set to conclude and return to Earth later this year. [Ardbeg PR] 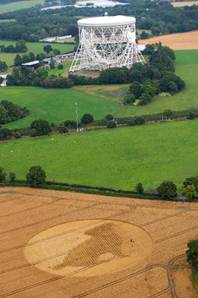