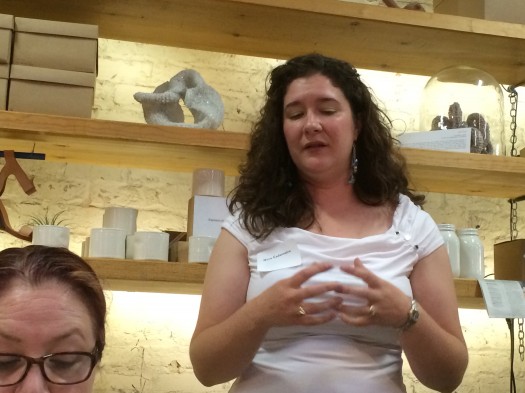 New to the Robert Mondavi winemaking team is Nova Cadamatre, who hosted a few dozen writers recently to an exploration of various Robert Mondavi Cabernet releases, all of which hail in total or in part from the famed To Kalon Vineyard, which is adjacent to the Mondavi winery facility.

Cadamatre guided us through seven wines — four freshly vinted varietals straight from various To Kalon blocks (all harvested in 2013, they’ve been in barrel for about 9 months), and three finished wines, all Cabs, from the 2010 vintage.

The idea here was to see how the vineyard impacts the wine. These three Cabs represent a wide range of Mondavi’s offerings, including the $28 Cabernet Sauvignon Napa Valley, which uses a small portion of To Kalon in its blend; the $55 Cabernet Sauvignon Oakville, which is 99% To Kalon; and the $145 Cabernet Sauvignon Reserve, a collectible wine that is also almost entirely from the To Kalon vineyard — but is made from different blocks than the Oakville.

To be sure, grapes matter. The Napa Valley Cab (B) bottling is pretty enough and drinkable, but not really anything to write home about. The Oakville (A-) offers better balance, more jam and chocolate, with distinct blackberry and blueberry notes. It’s a considerable improvement, as the price tag should indicate, too. The Reserve (A) is, as expected, the best of the lot, though it is bound in quite a bit of tannin at present, showing raisins, bramble, and some flinty earth notes. Here, in comparison to the Oakville bottling, you can really see the different a few hundred yards and older vines make, even if value remains subjective.

Looking at the barrel samples, it was easier to see how older vines led to more complex wines. Wine made from very young vines from To Kalon was heavy on fruit and flowers, with molasses notes behind. As the vines got older — 15 and then 30 years old — tannins grew and the fruit became less simplistic, more wrapped up with wood notes and showing strong herbal character.

The moral of the story: Vineyards matter, vineyard position matters, and older vines can lead to complex wines — at least in the case of Robert Mondavi Cabernet. While I’m not suggesting you get seduced by the appearance of “Old Vines” on a wine label — the term is meaningless and is usually reserved for Zinfandel in the U.S. — it’s something you can leverage as a consumer next time you’re getting chatted up in a tasting room. Ask about vine age. See if your expectations match what’s in the glass. If you can, try the same experiment with wines made from the same vineyard but from vines of different ages — and see what your palate has to say.