Beer Rated A Rated A- Reviews

These days, Stone Brewing Company is a juggernaut of new releases, with new brews sometimes arriving at the pace of one every couple of weeks. Here we have two of Stone’s latest, including a relaunch of one of the company’s most famed IPAs, and a three-way collaboration among some California brewing icons.

Thoughts on both follow. Get ’em while you can!

Beachwood/Heretic/Stone Unapologetic IPA – This collaborative brew is from the California-based trio of Beachwood Brewing (Long Beach), Heretic Brewing (Fairfield), and Stone (Escondido). It’s a big IPA crafted with Magnum and Chinook hops, plus four new Washington-grown strains (HBC 342, Hopsteiner 06300, Azacca, and Belma), giving it a truly unique makeup (and a bit of a new flavor profile, too). The beer is a hop monster but it’s also loaded with fruit flavors. After the initial rush of bitterness dies down, look for notes of lemon and peaches, almost like a fruit custard has been blended into the classic, piney notes of the IPA. The finish is sweet and tropical, hinting at coconut milk, making for an unusual IPA that is both intensely hoppy as well as dessert-friendly. 8.8% abv. A- / $9 per 22 oz. bottle 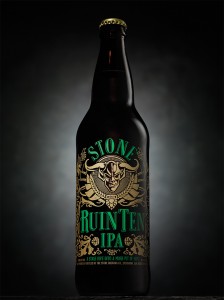 Stone RuinTen IPA 2014 – “A stage dive into a mosh pit of hops” is about right. This is the 2014 release of Ruination, which Stone originally launched to much fanfare in 2002 and which was released as an even hoppier version in 2012 for the 10th anniversary of the company. The recipe here is the same as the 2012 bottling; only the name has changed. (The name is intended to be suggestive of what this beer will do to your palate, given its 110 IBUs — and, at over 10% alcohol, what it will do to your mind as well, I presume.) RuinTen features ample hops (five pounds of Columbus and Centennial hops (then dry-hopped with Citra and Centennial), per barrel of brew), but presents itself with class and finesse. The nose and body are resinous with pine tree sap, bitter orange peel, and cloves. Ultra-ripe fruit comes on strong as you sip it, culminating in a somewhat malty, syrupy, and lightly smoky combination of flavors. The finish offers hints of marshmallows and canned fruits, pine trees and applesauce. All kinds of flavors going on, and firing on all cylinders. 10.8% abv. A / $8 per 22 oz. bottle