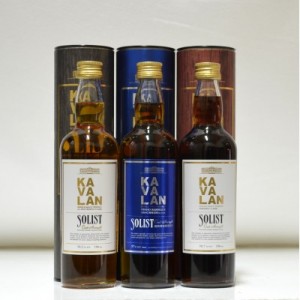 Kavalan is the best-known Taiwanese whisky distiller (at least in the U.S.), rapidly increasing its footprint from a single bottling just a few years ago (which we reviewed) to a total of nine on the market now. At least five of these whiskies, all single malts, are available in the U.S., and today we take a fresh look at this five-bottle lineup, which includes two standard-proof bottlings and three from the cask-strength Solist line.

Kavalan doesn’t bottle its spirits with age statements, but it does rely on some exotic barrel treatments to create some truly unique spirits.

Kavalan Single Malt Whisky (2014) – I get strong apple notes up front this time around, followed by healthy citrus character. Otherwise my notes mimic those I had in 2011. The palate drips with honey, balanced with modest toast-and-cereal notes, vanilla, and and touches of nougat. The finish brings a pleasant bit of fruit to the forefront before fading away. Straightforward, a bit rustic, and quite simple, it drinks like a young single malt Scotch, modest yet full of life. 80 proof. B+ / $73  (prior rating: A-)  [BUY IT NOW FROM CASKERS]

Kavalan Single Malt Whisky Concertmaster Port Cask Finish – Look for the unmistakable jade-green bottle. Finished in a variety of Port casks, this whisky has a bolder, fruitier nose that hints at raisins and Christmas spice. The body brings it all home, with lush fruit notes — plum and plump raisins, hints of fresh cherries, all lightly touched with cinnamon and morsels of cereal. The finish keeps it going for the long haul — lasting with ample spice notes. It’s drinking well in the summer but would be perfect for Christmastime. 80 proof. A- / $89 [BUY IT NOW FROM DRIZLY]

Kavalan Single Malt Whisky Solist Ex-Bourbon Cask – A rather muted nose, hard to parse out from the aroma, though eventually it reveals notes of apple and red berries, with a slight iodine kick to it. The body is something else entirely, punchy with raw alcohol that masks a citrus kick alongside notes of vanilla and peaches — maybe even a touch of coconut. The finish is on the short side — mostly fire, a touch of sawdust, and a vanilla-soaked marshmallow that fades away just a bit too fast. Try water. 114 proof. B+ / $170 [BUY IT NOW FROM DRIZLY]

Kavalan Single Malt Whisky Solist Sherry Cask – Matured fully in oloroso sherry casks; a dark tea-brown in color. What an unusual spirit… the nose offers notes of dried figs and prunes, with a well-aged sherry character to it. The body is intense, a bruising collection of Madeira notes, rum-soaked raisins, burnt orange peel, and cocoa bean. Slightly bittersweet on the finish in the way that old sherry can be, it’s a digestif style whisky with plenty of depth and originality. 114 proof. A- / $180 [BUY IT NOW FROM DRIZLY]

Kavalan Single Malt Whisky Solist Vinho Barrique – Matured fully in ex-American red wine barrels that have been re-charred. Deep amber, about the same as the prior whisky, this spirit offers a dense and deep nose, offering exotic notes of ginger, chocolate cake, and salted caramel. The body brings out those chocolate notes, touched with a surprising licorice note and some extra spices — lemon pepper, cloves, and a healthy slug of wood. Wild and, again, exotic stuff. 114 proof. A- / $157 [BUY IT NOW FROM DRIZLY] 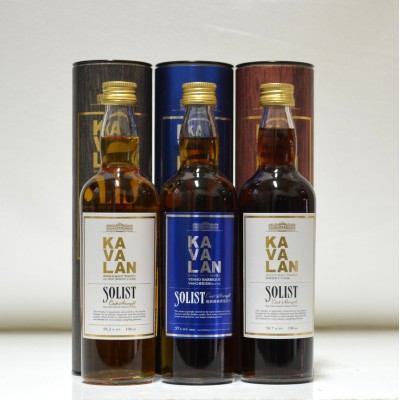