While other columnists and pundits bemoan the loss of innovation from the millennial generation, there’s a group of students looking to become the exception to the rule. Three enterprising young folks are developing Prime, a new beverage guaranteed to eliminate hangovers. While it will help with the next morning, the group claims that it will not help the user in avoiding bad choices the night before. The group has set up an indiegogo campaign to help develop the product further. On a most excellent TV side note, the team of college students also has a chemistry student named Walter as one of its founders. Looking forward to seeing where this goes!

In other science news, we took a break from enjoying gin and tonics, strawberry mint juleps, and other concoctions to read this outstanding piece by Jordan Devereaux, aka the Cocktail Chemist. It’s the first of what could very well be a multi-part piece on the actual chemical effects alcohol has on the body. It’s incredibly heavy on the science, but well worth the read — having a Wikipedia tab up for certain elements of the discussion helps as well. Excellent stuff. We’re looking forward to part 2. [Chemistry of the Cocktail]

A new study to be published in Alcoholism: Clinical & Experimental Research is making the case that folks mixing alcohol and energy drinks do so for purely hedonistic reasons. This one may seem quite obvious to anyone who has spent a weekend surrounded by people at a dance music festival. However, looking for the surprising connection, researchers found that:

“People who drank A+EDs to sober up were actually at an increased risk of experiencing alcohol-related injuries and harms… This finding is interesting because it could mean that consumers are incorrect if they are assuming that drinking caffeine might reduce their intoxication.”

So: Alcohol gets you drunk, no matter what you mix it with. All clear? [Science Codex]

Finally today, the New York Times takes craft beers down to the microscopic level and examines the genetic map of the beers. Not as science-heavy as some articles on yeast and genetic origins, but it certainly highlights the promise and potential of future innovations in yeast strains we may be enjoying in the not too far off future. 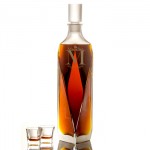