Review: Italian Wines from The Order of Malta, 2014 Releases

May 1, 2014/Christopher Null/No Comments
Rated A- Rated B Rated B+ Reviews Wine

The Order of Malta. The Knights of the White Cross. There’s a whole lot of mystery from the get-go with this collection of Italian wines, all of which bear the distinct white-on-red, stylized, squared-off cross on their labels… but which reveal nothing about what that insignia means.

What’s it all about? The Sovereign Order of Malta is an ancient Catholic Religious Order that continues today to provide global relief efforts to areas affected by natural disasters. There are different chapters of The Order around the world. One of the things the organization does is make wine. For the first time, wines from The Order of Malta are now becoming available in the United States, courtesy of Fritz Cellars (Clay Fritz was a member of The Order for a number of years before deciding to import the wines).

I wasn’t able to attend a formal tasting with Fritz, but I did receive a number of the newly imported wines for review. Thoughts follow.

2012 Rocca Bernarda Ribolla Gialla Friuli DOC – Ribolla Gialla is an indigenous grape to Italy, and at first this white wine drinks like an indistinct blend, fruity and moderately acidic, but a bit touch to parse. As it warms, notes of honeydew and white flowers develop, adding some mystery to an inexpensive and drinkable wine. B+ / $27

2012 Castello di Magione Monterone Grechetto Colli del Trasimeno DOC – A brilliant gold wine with massive fruitiness all around. The nose is rich with apples, pears, apricots, and bright honeysuckle notes. The body is tart and rich with all of the above, but also laced with buttery vanilla. The finish is zippy and alive, like a lemon meringue pie. Good stuff.  Amazing value. A- / $25

2008 Castello di Magione Morcinaia Vendemmia – An Umbrian blend made from Sangiovese, Cabernet Sauvignon, Merlot, and Gamay. It’s the Sangiovese that pops the brightest, with bright cherry notes at play with some earthy, slightly herbal character (Gamay, maybe?). Solid body, but nothing mind-blowing. The finish is a bit tart for my tastes, but it works well with food. B / $40

2012 Castello di Magione Sangiovese Umbria – A brisk, classic (albeit young) Sangiovese. Floral notes on the nose interplay with cherry fruit, while a brambly character brings nuance to the body. Some dried herbal notes hang around on the finish. Very food friendly and well-crafted considering the price. A- / $25 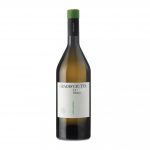