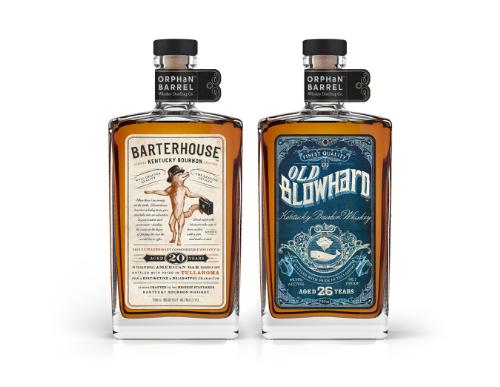 Everyone loves a good story, and to spin a good yarn around an original tale is becoming a talent synonymous with spirits industry. A brand simply can’t stand on its merits alone anymore. A successful product launch now requires no less than a multi-million dollar yacht, international release parties, the courtship of the tastemaker kings and queens, and a celebrity endorsement or five. However, nothing shines quite like a good lacquered coating of embellishment to make a product beam in the eyes of the unsuspecting and trustworthy. It is human nature and a constitutional right to amplify facts with the intent of impressing people. Once in high school, a certain writer once stretched a passing conversation with punk rock legend Ian MacKaye into a lunch of vegan tacos, Coca-Cola and a two-hour conversation about the future of his band Fugazi.

So it comes as no surprise that Diageo, dream weavers of the potentially-fictitious dream history of Bulleit, present the Orphan Barrel project: a new chapter in the company’s incredible alternate history of whiskey. If Diageo’s tale is true — some of a challenge in these dangerously murky marketing waters — these barrels were found aging in the mythological temple/warehouse known to Bourbon enthusiasts as the Stitzel-Weller distillery. According to the company, a very select and limited number of these barrels were picked to launch this new whiskey series, with more planning on being “discovered” throughout the forthcoming seasons.

Now it appears this long-lost S-W juice was actually made at the Bernheim distillery. The barrels also weren’t “lost,” they just never got used for their original intent. What was the original home intended for these barrels? Either Diageo doesn’t know (unlikely) or simply isn’t saying, which seems more likely. Why let those traveling down the yellow brick road get a peek at how the Wizard makes the sausage?

Either way, the barrels were shipped from S-W and bottled at the Dickel distillery in Tennessee, a state enjoying the attention and courtship of Diageo as of late. How many barrels? Good question. No one knows the answer to that either, but the edition numbers on the back of the bottles posted on the internet have now reached the 40,000 mark. Given how little would be left in each orphaned barrel at 20+ years of age, the number of barrels involved would have to be in the thousands, hard to “lose” and hardly qualifying as “limited edition” — unless you’re comparing it to the voluminous output of something like… say… Jack Daniel’s?

This lack of confidence on provenance combined with a balance inquiry at a local ATM were big sticking points as to whether or not we should purchase samples for review. Neither eager nor willing to shell out the $225 required for both bottles, a local establishment was pouring small samples for ladies and gentlemen who would otherwise shop the aisles for Kentucky Gentleman. $10.50 was the safer investment of the two options, it made sense to minimize risk and see what the buzz was about. As Chris is wont to say: “Thoughts follow.”

Diageo Orphan Barrel Project Barterhouse 20 Years Old – With more text on the bottle than a Russian novel, Diageo seems hellbent on cramming as many typographical flourishes as possible per label to remind the consumer of the epic saga they’ve purchased for their mantle, possibly to distract you from what’s inside. (It’s worth noting that Barterhouse’s mascot is a rather sly looking fox.) It’s incredibly sweet, with vanilla and butter on the nose, and soft on the palate, making it hard to even believe this is 20 years of age (with very little oak or sulfur on the taste). The finish is even weaker. Very easygoing and inoffensive, it would be a great starter bourbon for the uninitiated and those with ample money to spend. 90.2 proof. B- / $75 [BUY IT NOW FROM CASKERS] [BUY IT NOW FROM FROOTBAT]

Chris says: I get more of a burnt toffee and considerable heat on the nose, with cinnamon and brown butter on the body. Kind of a weird balance of flavors, but a lot going on. I found this fun to explore, but difficult enough on the finish to make things a bit strange. My rating: B+

Diageo Orphan Barrel Project Old Blowhard 26 Years Old – A 26-year-old bourbon bearing the name of a cantankerous old man. I might be reading too much into the glass with the brand names here, but if I’m right Diageo isn’t being very subtle. It has a very strong presence right from the moment it lands in the glass. A nose of spices, cinnamon, and a touch of campfire smoke blend with a strong taste of toffee, vanilla, cloves, and a plentiful punch of oak. By comparison to Barterhouse (below), it has a much stronger and present finish with a nice burn of oak and alcohol. At $150, though, it’s hard to get excited on the cost versus quality scale of things. There are way better bourbons at this price point worth considering. That said, this is definitely the better of the two “orphan barrels.” 90.7 proof.  B / $150 [BUY IT NOW FROM CASKERS] [BUY IT NOW FROM FROOTBAT]

Chris says: Quite a different animal. Cloves and peppermint on the nose. The body shows off big vanilla and toffee notes, but the finish turns a bit brutish, with a kind of heavily-flamed orange peel character. Becomes increasingly woody as it opens up in the glass. Intriguing. B+

With this new armada of orphan barrels, Diageo is placing bets on the casual consumer who enjoys higher end premium stuff and places as much stock on the envelope, paper, and penmanship as they do the contents of the letter. The kind of person who would purchase a $150 bottle of bourbon in order to subtly out-compete at the court of the well-heeled Keeneland’s clubhouse on opening day, or a tailgating affair at Churchill Downs in May. Much to the company’s credit, it sort of works. They’ve managed to put the fox in some very nice sheep’s clothing for the flock. However, in the end, the best consumer is one that is as well-informed as possible. Or as the song goes: “Never mind what’s been selling, it’s what you’re buying.*”

Limited Edition of Ten Frillion, or whatever number Diageo wants.

*The author is well aware of the thick glaze of irony created by enlisting references to the traditionally sober, straight-edged and highly anti-corporate Fugazi in a whiskey review.