Here’s something you don’t see every day: A Borderies-grown Cognac… that’s also a youngish VSOP. Borderies, for those not in the know, is a small, very renowned grape-growing subregion of Cognac. Normally, Borderies bottlings are old XO expressions — which command even higher prices due to their regional pedigree. 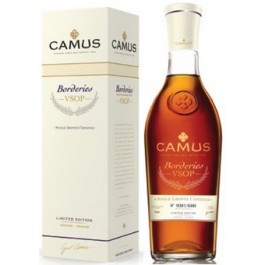 And while Camus does offer an XO Borderies, it has recently (and quietly) put out this VSOP Borderies expression, a rarity I’ve never seen before now.

It just so happens I had a fresh bottle of Camus VSOP (now known as Camus VSOP Elegance) to compare against this limited-edition Camus VSOP Borderies. Here’s how they shake out.

Camus VSOP Borderies Cognac – More fruit up front here, growing considerably as it gets some air to it. Cinnamon apple, apricots, even coconut and pineapple notes come across. You don’t get much of that with the standard VSOP, which keeps its cards closer to its vest. The finish only builds up the fruit component. 15,000 bottles made. A- / $57 [BUY IT NOW FROM DRIZLY]