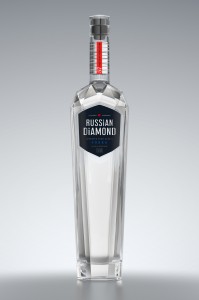 Russian Diamond would like to turn your attention to the Italian fabric labels (hey, it’s felty!) and the 57 filtrations it goes through before bottling. What I want to alert you to is that Russian Diamond is really Russian vodka. With Stoli made (at least in part) in Latvia and Smirnoff made primarily in the U.S., finding real Russian vodka isn’t the easiest thing to do any more.

Made in an old distillery (it’s been modernized) outside of Moscow, Russian Diamond is about as authentic as you can get. That said, Russian Diamond is a melding of Old World processes and New World sensibilities. After all, according to the company’s press release, the filtration system alone includes “multiple fabric filters that smoothen [sic] the taste, biological filters, such as needles of Siberian pine tree and larch tree, herbs and grains, which enrich the drink with the powers of the nature itself.” (The vodka itself is distilled from wheat and rye and incorporates local water from Moscow’s Mytischchi springs.)

What then does it taste like, you ask? Good question. The nose is a standout, offering crispness and a clean character, while not being harsh or overly medicinal. This is a tricky feat to pull off, as most vodkas either veer too far into hospital notes or drift wildly into the bakery with a strong, sugary character.

On the palate, it’s admittedly sweeter than I’d like, further evidence that very few spirits makers are immune to the increasing sweet tooth of the worldwide palate, particularly in the U.S. The vodka offers notes of chocolate, butterscotch, and touches of lemon/lime on the finish. The bracing character of the nose is largely absent on the tongue, but the sweetness does make for an interesting counterpoint to its racier nose.