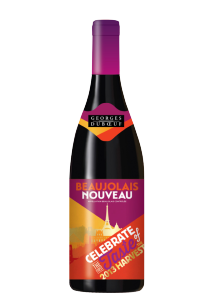 Hey guys, it’s turkey day! But the end of November also means one thing for wine fans: The release of Beaujolais Nouveau, the first wines to come from the just-finished 2013 harvest. As usual, Duboeuf is first out of the gate, and these bottlings should be on store shelves right now if you need a last-minute holiday tipple.

2013’s Nouveau is surprisingly better than the usual simplistic and rustic fare that is the hallmark of this style of wine. That’s not to say 2013’s release isn’t simplistic or rustic — it’s both — but it does have some nuance and refinement that is often lacking in Beaujolais Nouveau.

The nose is full of the usual strawberry candy notes, but there’s also an herbal edge to it that adds intrigue. The body is less aggressively sweet than usual, too, offering some balance and tart acid on the finish. The flavor profile is simple, with a basic fruit compote character, but notes of orange peel on the finish give this something to at least talk about while the turkey is still roasting.