With Pappymania 2013 reaching a fever pitch, we figured we would review some wheated bourbon alternatives to satisfy those not fortunate enough to get their hands on a bottle so they could re-sell it for simply ludicrous prices.

W.L. Weller Special Reserve (2013) – Formerly carrying a 7 year old age statement (Buffalo Trace has since removed the age statement on the label, though claim it’s still aged around the same span of time), this is the value edition of the trio, clocking in at about $12. However, unlike most lower shelf bourbons, the quality isn’t really sacrificed here. A very honey and vanilla infused nose turns into a mellow palate, with traces of caramel and cinnamon. There’s a sharp, almost peppery burn at the end, which punches and fades away quickly. 90 proof. B / $12 [BUY IT NOW FROM CASKERS] [BUY IT NOW FROM FROOTBAT]

Old Weller Antique 107 (2013) – The middle child often gets unfairly overlooked, and Weller is no exception. Weller Antique has been a mainstay on the shelf for an every-day bourbon for quite some time, with really good quality at an affordable price point. The nose has a bit more cinnamon and molasses than Special Reserve, and less vanilla than the 12-year edition. The taste brings the heat without too much emphasis on the alcohol. Get on the train before the fare increases and goes the way of its older sibling, the 12 year. 107 proof. A- / $22 [BUY IT NOW FROM CASKERS] [BUY IT NOW FROM FROOTBAT]

W.L. Weller 12 Years Old (2013) – The one that many folks in the know have lovingly christened “baby Pappy” (close in age, same mash bill) has garnered quite a following itself, with supply so low it’s only being offered semi-annually if you’re lucky. There’s a heavy dose of vanilla from start to end, which is accentuated by oak and cinnamon in the palate. The finish is sharper and lingers a bit more than its siblings, with more smoke and char for a finale. A raised proof could make it a serious contender and increase its fan base. Definitely worth picking up should one spot a bottle in their local store. 90 proof. A- / $26 [BUY IT NOW FROM CASKERS] [BUY IT NOW FROM FROOTBAT] [BUY IT NOW FROM DRIZLY] 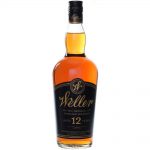