Like you, I don’t often think much about Madeira. If I want a dessert wine, I drink Port almost exclusively. When I see Madeira on a menu I invariably ignore it. But maybe I shouldn’t be. And maybe you shouldn’t be either.

Madeira is one of the most venerable wine styles from history which is still being produced. Its origins like in the 1400-1500s, when explorers began visiting the Atlantic island of Madeira as a port of call during trade runs. The fortified wines made here traveled well and lasted basically forever, even once they were opened. (Blandy’s says an open bottle of Madeira will last indefinitely.) Madeira was the It Wine of the 1700s in America, and was used to toast the signing of the Declaration of Independence.

The wines came in all sorts of styles, driven by the grape used to make them. There are dry(ish) Madeiras, and their are sweet Madeiras. Despite being made on one tiny island, these wines comprise a wide range of styles.

Madeira isn’t Sherry, and it isn’t Port, although it has a lot in common with both of them. The best way I can explain it is that Madeira is somewhere between the two of them — not as sweet as Port, but not as funky and off-putting as Sherry (usually) is.

Madeira is unique in the wine world in that the wine, while aging, is kept hot. Very hot — up to 140 degrees Fahrenheit — for a long, long time. This has to do with the traditional way in which Madeira was made, vinified and put into barrels, then shipped on long sea voyages to the tropics and back. They got lots of heat on these trips, and that gave Madeira its signature nose and taste.

Most Madeira you’ll find on sale now is nonvintage, like the 4 bottles from Blandy’s tasted below. This is the easy-to-find, very affordable stuff. But vintage Madeira also exists, and if you’re looking for a really old bottle of something as a gift, Madeira is invariably your best bet (both on price and the odds that it will still be drinkable). The stuff really does last forever and it gets better and better. In fact, the best Madeira I’ve ever had was a Bual-varietal expression made in 1922.

Blandy’s recently sent a sampling of its simplest Madeiras, all five years old, each made from a different grape: Sercial, Verdelho, Bual, and Malmsey. These are all basic, simple Madeiras, but they do showcase how variable this wine can be, from its dryest version to its sweetest. I gravitated to the sweetest (aka “richest”) versions personally, but see the charms in all of the varieties.

NV Blandy’s Madeira Sercial Dry 5 Years Old – A pale, light amber/orange color. Fresh, Madeirized-sherry nose, with notes of orange, apricot, and wood oil. The body is mostly dry, offering an initial slug of woody fruit (or fruited wood), with a moderate finish that trails off, leaving behind a somewhat rubbery, oily conclusion tinged with blood oranges. Not at all unpleasant and dry enough to drink with dinner (oysters, maybe?). B

NV Blandy’s Madeira Verdelho Medium Dry 5 Years Old – Considerably darker, a ruddy honey/bronze color. Milder nose. More orange and toffee, and hints of chocolate. On the tongue, clear raisin notes offer a slight sweetness that may have some thinking this is a young tawny Port, but there’s less oxidation in this, along with a sharper finish and that classicly rubberized character in play. B+

NV Blandy’s Madeira Bual Medium Rich 5 Years Old – Darker still, the color of brewed tea, tinged with a touch of red. Inviting, Port-like nose rich with raisins and spice. This follows through on the tongue, revealing Christmasy cinnamon, vanilla, and slight gingerbread notes, with just a hint of classic Madeirized character at the very end. Easily mistaken for a mild tawny Port, in a good way. B+

NV Blandy’s Madeira Malmsey Rich 5 Years Old – A shade darker again, almost (but not quite) a cola brown. Quite a different animal. Ample wood and cocoa powder notes on the nose, with hints of cola. The body offers all sorts of good stuff — walnuts and hazelnuts, more cola, chocolate, and a big, raisin-infused finish. A lot like a port, but backwards. Here the sweetness comes along in the end, not up front. Very drinkable and complex, and a natural fit with dessert or the cheese plate. A- 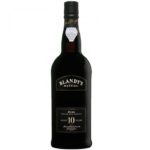