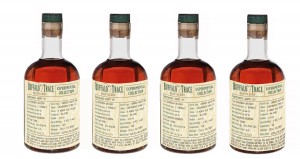 Buffalo Trace, no stranger to experimentation, recently released this intriguing series of bourbons as part of its Experimental Collection. The idea: Vary entry proof from very low (90) to fairly high (125), and keep the barrels otherwise exactly the same.

Entry proof, for those not familiar with the lingo, is the term that describes the alcohol level of a whiskey when it goes into the barrel for the first time. Generally whiskey is not barreled at the alcohol level that came off the still. It is rather watered down, often to between 105 and 125 proof, before it’s sealed up to rest for years.

With this series of whiskeys, the white dog came off the still at 130 proof. The recipe is a wheated mashbill, which was then split into four parts, one barreled at 90 proof, one at 105, one at 115, and finally one at 125 proof. All four spent 11 years, 7 months in barrel. When bottled, they were all brought down to 90 proof.

How are they different, and which is best? Here’s what I had to say…

Buffalo Trace Experimental Collection – Wheated 90 Entry Proof – Pleasant and mellow, it has a brisk level of heat on the nose, but not overwhelming. The body is moderately woody, with ample vanilla character. Applesauce and cinnamon build to an easy, lasting, and sweet conclusion, with just a lightly woody/sawdusty kicker. A-

Buffalo Trace Experimental Collection – Wheated 105 Entry Proof – Much less on the nose here, just wisps of lumber and alcoholic heat. The body: Completely dead, just nothing going on in this at all. Hints of coconut and milk chocolate, but otherwise this could be almost any kind of whiskey. A snooze. C+

Buffalo Trace Experimental Collection – Wheated 115 Entry Proof – Nose of butterscotch, some wood. Comes across as hotter as you take in the nose, but reveals banana notes, brown sugar, caramel, and more. On the body, quite unique, with a sweetness that’s spiked with lots of cloves and deep wood character. Still, it’s not overcooked, offering lots of depth in both its fruit and more savory characters. If I was buying one of these, I’d pick this one. A

Buffalo Trace Experimental Collection – Wheated 125 Entry Proof – Racy and spicy, with notes of cinnamon and raisins, both on the nose and in the body. Opens up as you sip it, but wood-driven characteristics take hold over the fruit, leaving behind a slightly bitter, hoary finish. Not unenjoyable, but more difficult than it needs to be. B

Fun stuff, but it might say more about barrel variability than it does about the merits of different entry proofs. 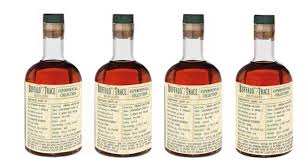