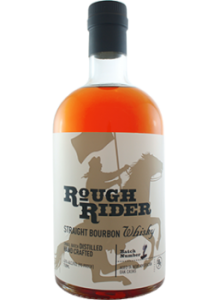 When I first tasted Rough Rider, a straight Bourbon made by Long Island Spirits (which we’ve covered well in the past), I thought I was tasting one of Kentucky’s finest. It’s a common, well-accepted trick: Take a barrel of old Kentucky (or Indiana) whiskey, ship it to your home state, and bottle it there (maybe after a little finishing time in a Port or other wine barrel). Presto: You’ve got your own, very high-end Bourbon.

Nothing wrong with that. Happens all the time.

(Well, not yet… See comments for correction.)

Inspired by Teddy Roosevelt (a native Long Islander), Rough Rider is made from a mash of 60% corn, 35% rye, and 5% malted barley. It’s aged for four years in new oak barrels before a further, complex finishing. From LIS:

“After aging, the bourbon is double-barreled, or finished, in wine casks,” says Rich Stabile, Long Island Spirits founder. “The wine casks include merlot casks and chardonnay casks, and are chosen from among the finest wineries on Long Island.” Before the aged bourbon is poured into the wine casks, though, each wine barrel is washed with a local, Long Island brandy. “The cask finishing wash tempers each wine barrel, resulting in a more mellow, complex bourbon,” adds Stabile. After the bourbon is finished for a few months in the wine casks (the exact time depends on the flavor profile of the batch), each bottle is brought to proof and filled by hand.

That’s a remarkably complex way to finish a whiskey… but it works. Rough Rider is a fantastic Bourbon, and a surprisingly affordable one, too. The nose is punchy and tannic — full of both wood notes and winey ones. The body backs this up. Initially full of sawdust and pencil shavings, it soon settles down to reveal tons of fun. It starts with Bananas Foster, black cherries, and licorice. Chocolate and root beer notes evolve from there, alongside more traditional and expected vanilla and caramel character. A long, Port-like finish comes along after that, offering some of that brandy’s sweet fruitiness by way of a digestif.

Great stuff. Great price, too, especially in comparison to so many wildly overpriced and under-aged craft Bourbons on the market. 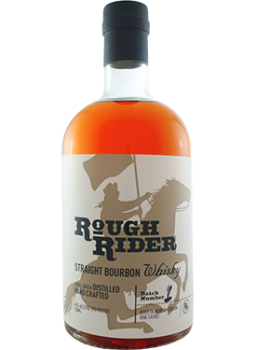