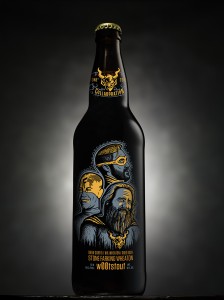 I don’t want to delve into the deep and sordid story that led to this insane idea becoming a reality, but suffice it to say: Stone Brewing Company has partnered with, of all people, Fark.com founder Drew Curtis and geek legend/homebrewer Wil Wheaton to create their very own beer. The duo actually did time in the brewery, hauling grain and working line at Stone. Then they got their pictures on the bottle.

The beer itself has quite a pedigree. An imperial stout by style, it adds wheat (for Wheaton) plus rye and pecans (from Curtis’s home state of Kentucky) into the mix. It’s then aged in bourbon barrels for 2 1/2 months before bottling at 13% abv. (Whoa.)

It’s a chewy, molasses-forward beer, with a nose that recalls chocolate covered cherries. I get a bit of smoke, too. The body is filling, and a little oily, but amazingly deep. The molasses and chocolate are the most pronounced part of the beer, with some nuttiness from the pecans evident on the finish. 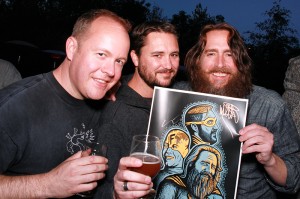 But those are just my notes. I also asked Curtis (pictured, on the left) for his tasting notes and he enthused endlessly: “Here’s some non-standard description for you: for folks who have ever had a bourbon barrel stout before, most of them have a few similar characteristics: thick and heavy, super sweet, strong bourbon flavor. Stone Farking Wheaton w00tStout has none of those.  I mean yeah it’s not particularly light, but it’s not super heavy or super sweet.  And a friend of mine told me ‘I think maybe I can taste the bourbon in it’ which is awesome because in most bourbon barrel stouts the bourbon flavor is a brick to the face. Treat this like wine folks, it’s 22 ounces at 13 percent alcohol-by-volume.  Drink with friends, and/or plan on not driving or operating heavy machinery afterwards.”

I reserve my favorite tasting notes for the end, which come courtesy of my friend Wes, who enjoyed the stout with me. And I quote, “If your goal is to get hammered, it’s a good beer. I’m drinking 13 percent beer, motherfarker!”

He meant that in the best possible way. 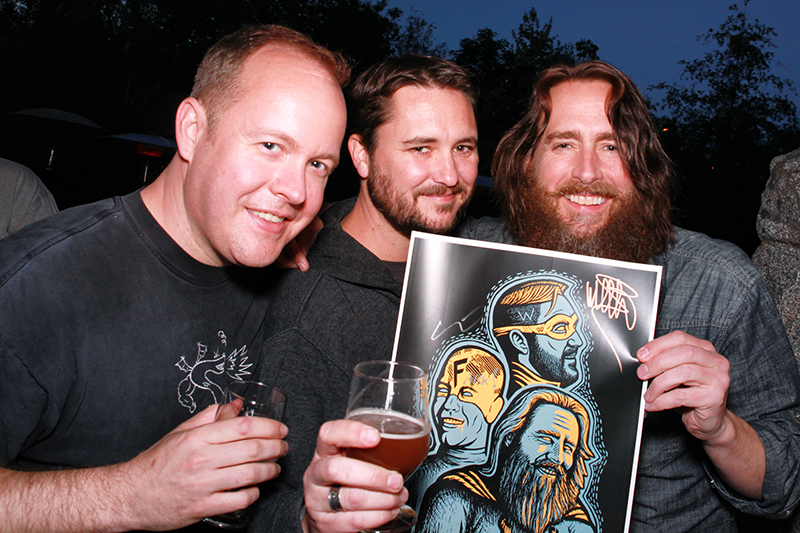 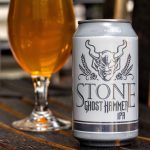