If you’re unfamiliar with the SkinnyGirl phenomenon, either you don’t go down the booze aisle at your grocery store or you’re a dude. SkinnyGirl is one of the fastest-growing brands in the spirits (and wine) world, and its vast array of “low-cal” alcoholic beverages have ladies’ night positively abuzz.

It was only a matter of time before SkinnyGirl hit the margarita world, and this pre-mixed margie is already drawing competition. One of those competitors is called SmarteRita. It may not roll off the tongue, but really we’re more concerned about how it fares going the other way.

We put the two cocktails head to head to see how they shaped up. Both were tasted blind. Notes follow.

with lemon juice notes and kind of a cheap tequila kick on the end before it gets all watery. This is tolerable (to be charitable), but barely. 37.5 calories per 1.5 oz. 25.4 proof. C- / $16 / skinnygirlcocktails.com

SmarteRita – Considerably murkier, hard to see through. Again, lemon on the nose, plus sweetness. Quite a bit sweeter than SkinnyGirl (thanks to sucrose). Not much agave character here, if any, giving this a feeling more like a mojito where someone forgot the mint. Again, tolerable, different than SkinnyGirl, but hardly a dazzler. 37 calories per 1.5 oz. 25 proof. C / $11 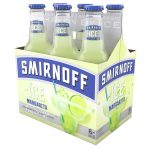