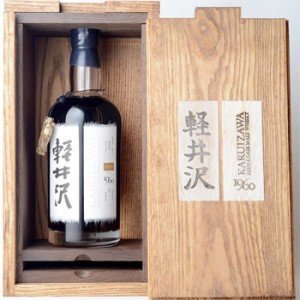 The world’s oldest and rarest Japanese whisky is now available to the general public for a cool $19,000. Bottled in 1960, this 52-year-old Karuizawa was aged in sherry oak and comes in a case fashioned with pieces from the original cask’s head. It’s available in an extremely rare edition of 41 and only at four locations around the world. Time to get that second paper route. [via press release]

In new product news, Ontario’s first micro distillery has arrived, an outfit called Still Waters. Stalk and Barrel Canadian whisky is finally available to the public, but with two small catches: It’s available either only at their distillery or online for Canadian residents only, which is also the first time the Canadian LCBO has allowed a micro distillery to do online sales. But those able to acquire bottles will be treated to an uncut edition at 60-65% abv whiskey from the first two casks, and a diluted 46% abv one from the third cask. So get there early! [Blog Toronto]

No weekend plans? Get out of your normal weekend routine, grab some friends, and head to a beer festival. We’ve received a flood of notices for beer festivals occurring this weekend, so we’ll just run them down this way in fairness to all:

And finally, if beer isn’t your thing, and you just happen to be in Texas, you may also want to check out the Great Tequilla Shootout. Over 20 different tequilas will be competing in a tasting and cocktails competition, with what appears to be plenty of food and entertainment throughout the day. Tickets are still available. [Great Tequila Shootout]