Lately we’ve received a whole bunch of “stocking stuffer” sized gadgets suitable for wine and beer fanatics. Rather than review them individually, we’re rounding them up here in a mega-gizmo post. Thoughts follow. 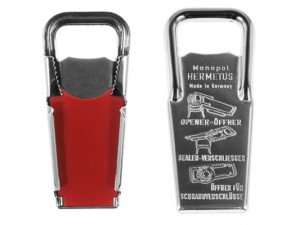 Hermetus Bottle Opener & Resealer – Sometimes you don’t want to drink that entire half-liter of beer, but if you’ve pried off the crown cap, what do you do next? The Hermetus is several gadgets in one, but the most noteworthy is that it reseals beer bottles. Just slide the lip of the bottle through the aluminum groove as far as you can: The groove pushes it against a rubber pad and seals it tight. Turn it upside down, shake it up, no worries — the beer won’t come out. It works on both U.S. and Euro bottles, and it includes a standard opener as well as a claw-like opener designed to help with stubborn twist-offs, too. Instructions engraved on the reverse remind you of all of this in case you’ve had too much. A / $9 [BUY IT NOW FROM AMAZON] 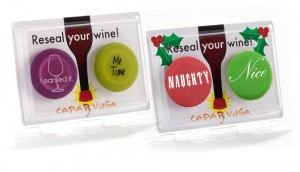 CapaBunga Wine Stoppers – Jamming a cork back into your wine bottle is crude and, to be honest, doesn’t work all that well. CapaBunga’s silicone caps are simple, streamlined, and don’t take up extra room in your refrigerator — a perennial problem from that cork sticking out an extra inch. I could do without the cutesy slogans (“I earned it”… “Me time”) on top, but they do the job at least. Custom versions are available. B+ / $8 for two capabunga.com [BUY IT NOW FROM AMAZON]

Vino2Go – A plastic wine glass, encased in a plastic sheath, topped with a plastic “sippy cup” lid that can be open and shut to prevent spills. I’m not sure how rugged most wine drinkers plan to get while they’re sipping on that bottle of Petrus, but Vino2Go will keep you from making a mess of yourself, at least, and keep you from running afoul of “no glass allowed” rules. Not exactly elegant, though, and pricey for a plastic cup. B- / $16 [BUY IT NOW FROM AMAZON] 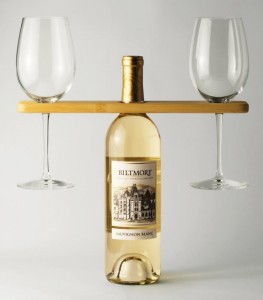 Vino Caddy – Available in four colors/wood varieties, Vino Caddy is simply a small board that’s been cut with a holes and grooves to make it easy to carry a bottle of wine and two glasses with one hand. The center hole goes over the bottle neck. The glasses slide into the two grooves. I found this a little rickety in actual use, and more to the point, solved a problem I’ve never really had. Carrying two glasses and a bottle of wine with one hand hasn’t ever been an issue for me… but maybe if you have tiny paws or just can’t figure out how to arrange these items in your mitts it could be worthwhile. Franzia-friendly version not available. C+ / $20 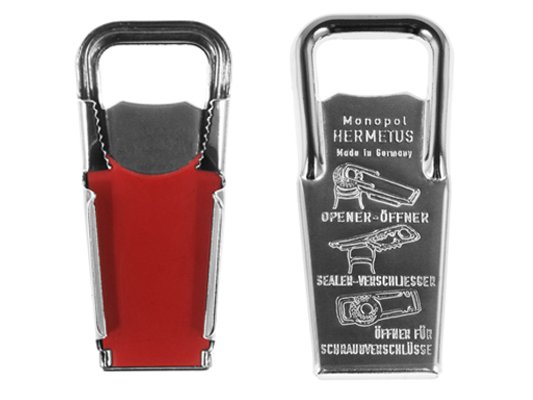