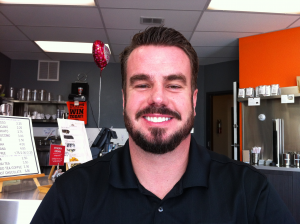 We’ve covered the brews of Redlands, California-based Hangar 24 before, and recently owner Ben Cook (and his crew) descended on SF for San Francisco Beer Week to pour some beers and talk about what his growing brewery’s been up to.

With 25 different beers made in 2012 (all available only in California; Las Vegas and Reno are coming soon), Cook isn’t afraid to experiment, relying heavily on local produce to come up with variations on the typical ale and lager. Beers like Orange Wheat are reflective of southern California’s heritage, and Hangar 24 has also used dates and pumpkins to create unique brews; its Polycot apricot beer is the best seller in its Local Fields series. Local labor is used to process the fruit — usually by hand, and often in exchange for free beer.

Hangar 24 Local Fields Vinaceous – Old Ale blended with California Mourvedre grapes and aged in French oak. Often mistakenly described as a “blend of beer and wine,” Vinaceous is actually a beer (old ale being a malty, aged beer style) that’s flavored with unfermented grapes. It’s quite a bizarre experience. On first pour the grape juice character comes to the forefront of the nose and the palate. Over time (especially as it warms up) this wanes and the malty beer and winey characteristics start to meld. Again, emphasis on the malt — it’s almost syrupy, with a roasted coffee and chocolate/caramel finish that comes on strong. The grapes fade out with a very vague Port wine character. I was at first a bit put off by all the craziness going on in this beer, but by the time I was through my first pint it had started to grow on me. 8.7% abv. B / $7 per 22 oz. bottle

Hangar 24 Chocolate Porter – A big chocolate porter flavored with type types of chocolate malt, cocoa nibs, and whole vanilla beans. Big and creamy, it’s exactly what you’re expecting (and hoping for, I’m sure): A silky dessert beer that’s like a brewed-up chocolate mousse. Some coffee on the nose and a lightly bitter finish remind you that you’re sipping on something for grown-ups. Just dandy. 8% abv. A- / $5 per 22 oz. bottle

Previous Article
Etch Your Own Flask… And Win One!
Next Article
Drinkhacker Reads – 03.26.2013 – George Washington’s Rye and Bud Light That Isn’t Bud Light