The art of spirits has been around since the before the official founding of our great nation. And like the really bad re-enactments we’re exposed to on the History Channel, we’re now being treated to a recreation from a recipe from our first President. The Mount Vernon estate will be recreating George Washington’s recipe for rye whiskey. The first batch will be available April 4th at a price tag of $95. Bad character actor not included. [Yahoo!] 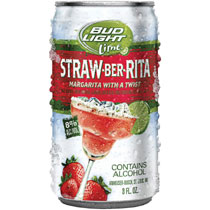 Simply not content with confusing the hell out of beer drinkers with its Bud Light Lime-A-Rita brand, Budweiser is poised to introduce the Straw-Ber-Rita later this month, mixing the flavor of Lime-A-Rita with Strawberry. Just to clarify for everyone who thought this was a beer mixed with a margarita in a can: there is no beer in here whatsoever. It is a flavored malt beverage. The only thing it shares with Bud Light is the brand name. [Bud Light Lime-A-Rita]

Another day, another festival: this time we have a grand tasting tour of the wines of the Paso Robles region on Thursday, April 11th at the glamorous Bently Reserve in San Francisco. And once again, it pays to be a fan of our site: if you register before April 5th and use the promo code TDH10, you’ll receive $10 off the cost of the $65 ticket. [Paso Wines]

This week (and it’s only Wednesday) has proven to be quite the week for the folks at Heaven Hill Distillery. Not only did they cork up their 6.5 millionth barrel, but they also announced the official arrival of the 2003 vintage of Evan Williams Single Barrel. This has become somewhat of a high point for bourbon lovers, and consistently scores high marks in our evaluations. [WHAS]

And finally today, if you’re like us we like to kick back to watch an incredible film by Tarantino, Truffaut, or Kubrick from time to time while enjoying a drink or three. Thankfully, so does our fearless leader, who launched his return to the film criticism world with a new site, Film Racket. This doesn’t mean he’ll be leaving the Drinkhacker any time soon, but will probably be doing triple duty for the foreseeable future. Of course, we’re terribly biased, but we think it is pretty good stuff for being two days old. Pop on over and check it out! [Film Racket]