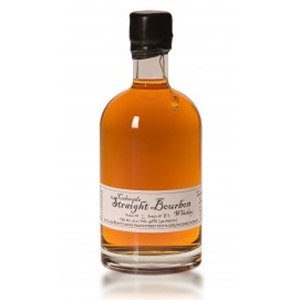 Peach Street Distillers, in Palisade, Colorado, is one our rising microdistillery stars, named Distiller of the Year in 2012 by the American Distilling Institute.

This Bourbon — you’ll have to look at the fine print to see the distillery’s name at all — is one of Peach Street’s flagships, a very small batch whiskey — and Colorado’s first “legal” Bourbon — made from Colorado corn and aged “over 2 years.”

There’s a heavy rush of wood when you crack it open, balanced by vanilla notes. The overproof body is hot, but it’s got plenty of well-aged flavor notes in it despite being just two years old. Exotic incense opens up the show, while apple and green banana notes come along soon after. In the rear, ample lumberyard character — how heavy did they char these barrels to get this flavor profile? — with lots of tannin. Powerful, but not overpowering.

In the end, I’m a little stunned. It’s hard to believe this is only two years old, and there’s none of that grainy funk at all left behind in the spirit. Definitely worth exploring.

A- / $80 / peachstreetdistillers.com [BUY IT NOW FROM DRIZLY]