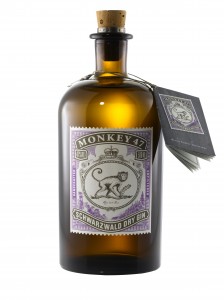 Monkey 47 is one of those spirits with a really long and involved backstory, but the nut of it is that you’re drinking crazy gin from Germany. Created by a WWII Royal Air Force pilot who settled in the Black Forest after the war, our hero made his own gin out of local ingredients and exotic botanicals inspired by his upbringing in India. The gin wasn’t commercialized, but its recipe was meticulously documented.

That recipe — plus intact samples — were recently discovered, nearly 50 years after Monkey 47’s creator vanished. And now, this oddball German gin is being commercially produced and can be yours… if you can track it down.

The Monkey refers to sketches that accompanied the gin (and which now grace the bottle). The 47, to the number of ingredients that are used in its production. That’s a really huge number, and while the full list isn’t published, the known ingredients include such items as cardamom, cloves, nutmeg, almond, ginger, Ceylon cinnamon, liquorice, Acorus calamus (aka sweet flag), bitter orange and lemon, spruce tips, lavender, iris, honeysuckle, blackberries, pomelo, lingonberry, sloe berries, sage, and verbena. The botanical list seems to have been driven as much by what was growing around the creator’s house as it was anything else.

And so, on to the tasting. While juniper is prominent on the nose, intense herbal notes rise up to meet it in stride. Dried rosemary and cloves are prevalent, along with a kind of dried mushroom character. On the body, there’s much less juniper, as those herbs punch through to the forefront. On the tongue the herbal quality comes across as fresher — again, rosemary is a biggie — plus lots of evergreen notes and some black pepper shortly behind. There’s a huge forest floor element to Monkey 47, too: woodsy, earthy, and a bit like the embers of a smoldering campfire. If you’re wondering if all that fruit in the infusion bill comes across, it does. At the end, Monkey 47 takes a sweet and fruity turn, with a slightly tart character that offers notes of blueberries, orange, crisp apples, and peaches. It’s very easy drinking despite clocking in at 94 proof.

Bizarre, lots of fun, and a wholly unique gin experience. Find some.