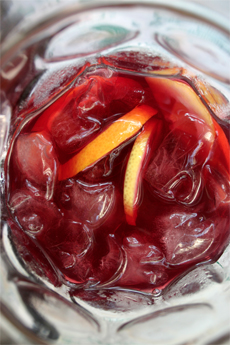 Just one day until the Mayans and everyone who posts REM’s “It’s The End of The World As We Know It” on Facebook is proven wrong. Or right. Either way, there’s a more important holiday today. Did you know the 20th is National Sangria Day?  It is!

A bit of trivia for you: Sangria is a drink whose origins are from Spain, and derives from the word sangre, which means blood.  Aside from National Lager Day, this may be the best holiday in all of December!

In time for those other holidays occurring this month, Georgi Vodka has reintroduced its candy cane flavored vodka for a limited time. We’re sure its only a matter of time before this festive treat is available all year, but for now grab some while you can. [PR Newswire]

In other festive news, death metal icons Sepultura have launched their own line of beer, just in time for the holiday season, according to Loudwire magazine. Sepultura Weizen is a wheat based brew which, according to the article, comes “in an incredibly awesome package resembling a Marshall amp”.  We haven’t tried it, as it is not available in the United States just yet, but some of us here are pretty stoked. Stay “tuned.” [Loudwire]

Across the watera bit, Bowmore has announced that its first bottle of Bowmore 1957 recently sold to an anonymous buyer in the United States for around $160,000.  It is not only the oldest Bowmore ever released, but also holds crown to the claim of being the oldest Islay Single Malt ever produced for sale. The better news? The net proceeds of the sale will be going directly to 5 separate Scottish charities.  [Bowmore]

And finally, Business Insider somehow stumbled upon a magnificent find via an old House and Garden magazine from 1961 advertising whiskey toothpaste. Hopefully a young, enterprising person out there will see this ad, become inspired to drop the flavored vodka business plan, and revive this most excellent concept. [Business Insider]

Have we missed a beverage-inspired holiday? Are you a retired NBA player looking to launch your own line of ultra premium spirits and need expert consulting? We’re here to help. Drop us a line: [email protected]