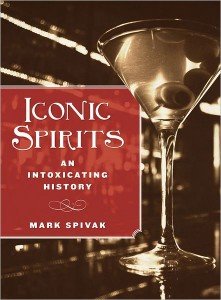 Spirits nerds love a good yarn about how such and such booze came into being, and with Iconic Spirits, Mark Spivak has put plenty of the best into one easy-reading tome. Curious how moonshining and NASCAR are inextricably intertwined (hint: it’s got nothing to do with the people watching it), or how St. Germain found its market? Spivak, a wine writer and NPR commentator by trade, has a breezy story to tell you.

Some of the 12 chapters in the book are well-worn history – the origins of Jagermeister and Grey Goose; the rise of absinthe – while others are more pointed and thought-provoking. My favorite: How Cognac was completely on the ropes until it was rescued by the club crowd… and where an uneasy peace between luxury goods and thug life has been forged.

I didn’t think much of Spivak’s chapter on Scotch – which he admits that he doesn’t like, anyway – but I was equally flummoxed by the reasons why people would drink ultra-bitter Campari, too, and enjoyed Spivak’s discussion on how we’re born to avoid bitterness from birth. Cocktail recipes at the end of each chapter are fine, but not overly necessary.

Good times all around, and this book would definitely make a good gift for a spirits enthusiast this season. If only it had been more thoroughly fact checked. Even on a cursory read I found goofs — they don’t drink Scotch on Mad Men (they drink Canadian Club), and hip-hop was not “originally known as gangsta rap” – but perhaps this is more a sign of Spivak’s ignorance of pop culture (forgivable) than his lack of knowledge about spirits (considerably less so).