Think you know Four Vines Zinfandel? This isn’t that Four Vines. That Four Vines sold its name to Purple Wine Corp. The old Four Vines is now called Cypher. The new Four Vines, well, it’s making pretty good Zinfandel in the footsteps of the original owner of the name. Here’s how the new 2010 bottlings of its all-over-California wine production shakes out.

2010 Four Vines Zinfandel “The Sophisticate” Sonoma County – Some smokiness on the nose, plenty of juicy fruit on the palate. Some spicy notes in the palate, plus a touch of cedar box, raisin, and a touch of wood oil round out a food-friendly bottling. B+ / $23

2010 Four Vines Zinfandel “Maverick” Amador County – Very spicy, with a big, extracted fruit character. Not a complex wine, with a moderate to light body that’s packed to the gills with flavors of juicy raisins, pepper, and fresh garden herbs, alongside hefty acidity. B- / $18

2010 Four Vines Zinfandel “Biker” Paso Robles – Dense, chocolates and currants, incredibly rich. Amazing depth offers fruit that doesn’t quit — black cherry on the finish, plus brewed tea and cinnamon. Lots to enjoy in this one. A- / $23 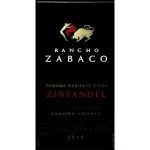