Bobby Fitzgerald is a restaurateur and bar owner in Chicago with a taste for exotic Bourbon. He’s one of those guys that collects single-barrel whiskeys for his establishments — entire barrels, not bottles — and at his Lincoln Whiskey Kitchen you can try a full seven different single barrel whiskey bottlings, from Elijah Craig to Weller to Woodford Reserve. Fitzgerald says he took five trips to Bourbon Country in 2011 to pick out whiskeys for his joints.

For reasons I am still not clear on (but not questioning), Fitzgerald sent us a bottle of his own private selection of Four Roses Single Barrel, just so we could experience it. Here’s the tale of the tape: Fitz’s Single Barrel is made from the OESO (20% rye, fruity/medium body yeast) mashbill, aged 9 years and 5 months in barrel and bottled on February 16, 2012. Bottled at cask strength of 115.4 proof.

Blazing hot, it comes across as far more scorching than Four Roses’ standard Single Barrel (OBSV: 35% rye, floral/creamy/spicy yeast), which is just 100 proof. After bringing it down with water to coax out more of its flavors, I get a lot more wood from Fitzgerald’s single barrel than from the standard Four Roses Single Barrel, with outstanding baked apple, baking spice, and cedar box notes. Plenty of frontier-style wood on the finish, but well balanced.

Compared to similar cask-strength editions of Four Roses that I had on hand, I found it most similar to the 2012 Single Barrel bottling (OESK recipe). But it’s unique in its own way — as any good single barrel whiskey should be.

Congrats to Bobby — you picked a winner! If you make it to Chicago, be sure to give this whiskey a try for yourself. Aside from his establishments and, now, my house, you won’t find it anywhere else.

Want your own single whiskey barrel? The typical barrel yields 200 to 230 bottles of cask strength whiskey. The price to you? It varies based on the producer and the yield, of course. Fitzgerald paid about $6,000 for this barrel — which is less than $30 a pop. Sounds like a good deal to me for enough whiskey to get you through the apocalypse and then some. 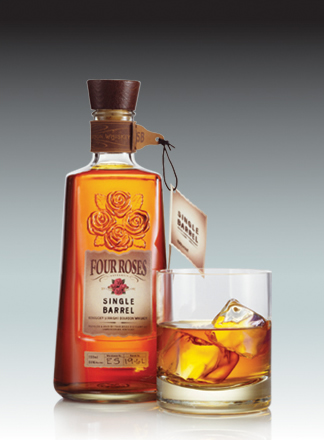