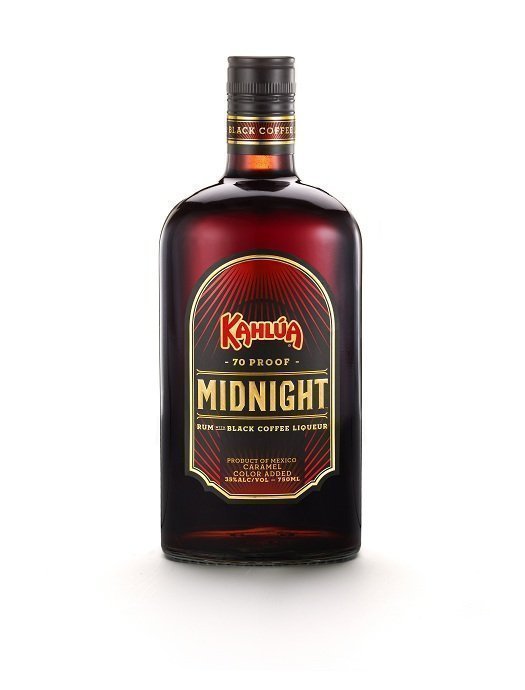 After midnight, we’re gonna let it all hang out… and we’re gonna drink this new liqueur from the increasingly huge portfolio of products from Kahlua: Kahlua Midnight.

Midnight is a major departure for Kahlua, which has to date been happy to create new versions of its signature coffee liqueur by adding additional flavorings like you’d find in a coffee shop (various incarnations now include cinnamon, vanilla, hazelnut, mocha, and peppermint versions). Midnight is something different: A 70 proof monster mix of the classic coffee liqueur with rum.

In truth, even the standard 40-proof version of Kahlua has rum in it (it’s touted on the label), but it’s watered down and sugared up so those Desperate Housewives can sip it all day. At 70-proof, Kahlua Midnight is nearly full-strength booze, more rum than Kahlua — though it’s still just as black as before (caramel color is added). In case you’re unclear, the bottle is completely different than the standard tiki-friendly Kahlua one.

In all honesty, Kahlua Midnight — in taste — is not a great departure from its mother, standard-grade Kahlua. The coffee is clear on the nose and the palate. Rum, as with regular Kahlua, is really just hinted at, indistinctly and more on the undercarriage of the nose than in the body, where the strong coffee character is simply overpowering to anything underneath it. It’s got more of a boozy kick in the middle, but the finish is mild, dominated by a clear, fresh-ground coffee character.

What’s the point of Midnight? It’s primarily meant for consumption straight, on the rocks. God help the hacker that uses this stuff in lieu of standard Kahlua and doesn’t realize what he’s getting into.