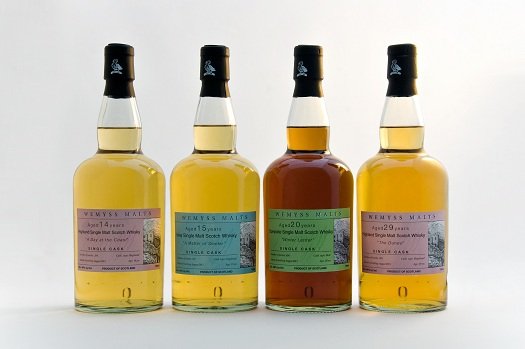 Wemyss (“weems”) Malts, based in Edinburgh, has become well known for its blended malt whiskys in a small number of years (it was founded in 2005). But Wemyss also releases a periodic series of single malt whiskys, all bottled from single casks, following a number of prior, limited-edition releases along these lines and in keeping with the fancifully-named whiskys of the Scotch Malt Whisky Society.

For 2012 Wemyss is putting out four new single malt single cask whiskys. Each of these is essentially a privately bottled whisky from another distillery (see details below). One important distinction: Each is bottled not at cask strength but at 92 proof. All were bottled in August 2011.

Wemyss Single Malt “A Day at the Coast” 14 Years Old – A Highland 14 year old hogshead from Clynelish Distillery. Tastes younger than you’d think, with lots of grain character left behind. Brisk orange and sherry notes, with a bit of a burnt caramel, seaweed, and bittersweet chocolate finish. Dusty, chewy, and salty all at once. 354 bottles made. B+ / $110

Wemyss Single Malt “A Matter of Smoke” 15 Years Old – An Islay 15 year old hogshead from Caol Ila Distillery. At least this one is fairly straightforward. Lots of smoky peat, but not overwhelming, with plenty of sweetness to back it up. There’s more of a biting medicinal character than I might like, an antiseptic feeling that lingers on the finish. That’s common with Islay, of course, but there’s also a tanginess here that is at once enjoyable and a bit disarming. 337 bottles made. B / $135

Wemyss Single Malt “Winter Larder” 20 Years Old – A Speyside 20 year old butt from Glen Elgin Distillery. Deep mahogany — distinctly different than the others in this series. Noses of cocoa powder and barbecued meat, the latter of which grows stronger as you take a sip. Notes of licorice, and a distinct, tarry petrol character come along later. More tannin, like “The Dunes” (see below). Tough to love. 654 bottles made. C / $130

Wemyss Single Malt “The Dunes” 29 Years Old – A Highland 29 year old hogshead from Inchgower Distillery. Surprisingly light in color for a whisky this old. Very sawdusty and sandy (perhaps that’s where “the dunes” comes from), the whisky starts off light but quickly turns toward meatier tones, like bacon fat and salted pork. The finish is tough and tannic. Not a fan. 202 bottles made. D+ / $185 [BUY IT NOW FROM CASKERS]

Wemyss Single Malt “A Day at the Coast” 14 Years Old