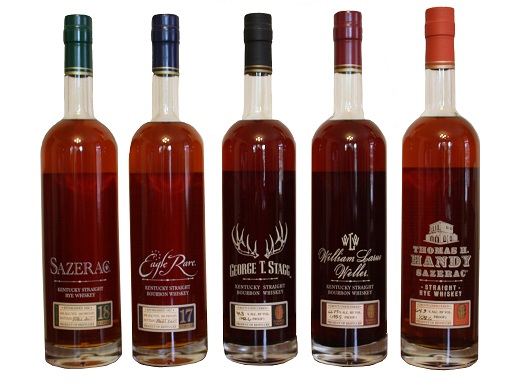 There are a few things you can count on in the whiskey world, and one of them is the annual release of Buffalo Trace’s always-anticipated Antique Collection, a compilation of five very old and very rare American whiskeys that pretty much sell out immediately once they land on store shelves. (I’ve seen bars where these whiskeys are locked up behind iron grates.)

Here’s how the five whiskeys of the 2012 Collection stack up.

Sazerac Rye 18 Years Old 2012 – Big rye on the nose, with some honeysuckle in the mix. The body is sweet, with touches of tobacco. More wood develops with time in the glass, and a splash of water. Lots of tannin on the finish, all that time in wood leaving behind a lot of dusty sawdust character. Water helps. 90 proof (as always). 90 proof. B+ [BUY IT NOW FROM FROOTBAT]

Eagle Rare Bourbon 17 Years Old 2012 – Very sweet, almost no woodiness for a 17-year-old Bourbon. Quite a bit of citrus under the caramel notes, I don’t get the “dry and delicate” character that the distillery describes in its official notes, but rather a classic whiskey with just a touch of tawny port character on the finish. Scarily drinkable though less complex than I might like. 90 proof. A-

George T. Stagg Bourbon 2012 – Chocolate and coffee notes a-plenty in this classic heater — 142.8 proof this year. Plenty of wood on the mid-palate, but it’s not overly hoary like the 2011 edition. A warming, sweet finish brings everything together. Make no mistake, this is hot, old whiskey — 17 years old for the 2012 bottling — but complex, burly, and quite delicious. A- [BUY IT NOW FROM CASKERS] [BUY IT NOW FROM FROOTBAT] [BUY IT NOW FROM THE WHISKY EXCHANGE]

William Larue Weller Bourbon 2012 –At “just” 123.4 proof, this year’s Weller is a lower-proof baby compared to previous renditions. Less exciting on the nose, this wheated Bourbon is mild, ultimately exhibiting some licorice and nutty, tree-bark flavors. Tannic and drying on the finish, even with water. 12 years old. B [BUY IT NOW FROM CASKERS] [BUY IT NOW FROM FROOTBAT] [BUY IT NOW FROM THE WHISKY EXCHANGE]

Thomas H. Handy Sazerac Rye 2012 – Definitely my least favorite of this year’s collection. The nose is innocuous, hinting at dark cherry character alongside cinnamon and some cocoa notes. The body, however, veers into somewhat overpowering astringency. Though just 6 years old, the woodiness is pungent and overbearing, leaving behind an oily, sawdust-driven finish that hangs around for a long, long time. It opens up with time in glass, but the overall effect just doesn’t come together the way it should. 132.4 proof. B- [BUY IT NOW FROM FROOTBAT] [BUY IT NOW FROM THE WHISKY EXCHANGE]