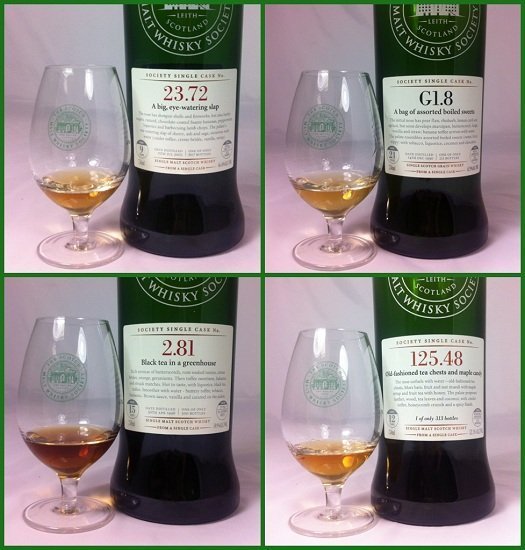 Another outturn from SMWS, this one including my first grain whisky sample from SMWS, covering September 2012.

SMWS Cask 2.81 – 15 year old Glenlivet from Speyside – Blazing Glenlivet that’s turned out from first-fill sherry butts. (It’s unclear how long the whisky spends in the sherry casks, but based on the deep Bourbon-brown color, it’s clearly a long while.) Rum raisin is on the SMWS tasting notes and it was the first thing that came to mind, a cinnamon-infused Christmas cake with plenty of orange-fueled sherry to back it up. Gorgeous whisky, though it doesn’t stray far from dessert tones. A few drops of water helps immensely. Distilled 1996, 119.8 proof, 210 bottles allocated for U.S. A / $120

SMWS Cask 23.72 – 9 year old Bruichladdich from Islay – Big, sweet, barbecue character, smoky and sugary all at once. Finished in refill sherry butts, and bottled ultra-hot. Water is a big help, and don’t be shy with it, which helps coax out some coconut, toast, and chewy hay characteristics. Really quite good for such a a young whisky. Distilled 2002, 132.8 proof, 90 bottles allocated for U.S. B+ / $90

SMWS Cask 125.48 – 12 year old Glenmorangie from the Highlands – Woody, woody, woody. Not in a bad way, more in a Bourbon way. Some citrus, along with malty cereal notes and a finish that offers nutty, almond-heavy character. Warming and well-balanced, even at bottle strength. Distilled 1998, 104.2 proof, 150 bottles allocated for U.S. A- / $110

SMWS Cask G1.8 – 21 year old grain whisky from North British Distillery in Edinburgh – A different animal, and clearly not single malt from the get-go. There’s a big butterscotch and lemon mix on the nose, but sipping takes things in a hugely new direction. It starts with brown butter character that delves soon into intensely herbal notes — licorice, with an almost amaro-like character that goes on and on, intensifying as the finish lingers. Tons happening here. Add water to improve the balance a bit, and mellow out the heat. Distilled 1989, 125.8 proof, 60 bottles allocated for U.S. B / $145