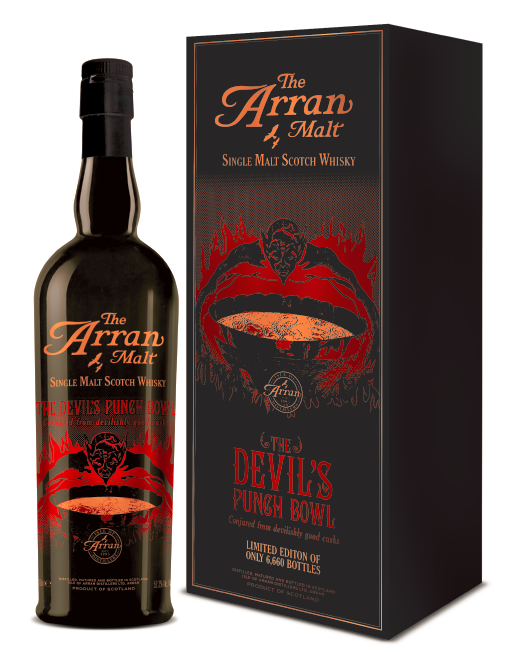 Best whisky name ever now goes The Arran Malt, whose new Devil’s Punch Bowl single malt is seductive and devilish — and comes with packaging to match.

Named for a glacial hollow called Coire na Ciche on the Isle of Arran, the boggy hill sits in the distillery’s backyard. The whisky inside is drawn from 24 different Arran casks, including some sherry butts, some peated and some unpeated. It is released with no age statement.

The whisky is easy on the peat and comes across instead with an immediate and big sherry character. The dark citrus oil notes are backed with lots of almonds and sweet marzipan, adding a bit of chewy dessert character to the spirit, along with a touch of smoke (but not much). The whisky is a bit warm on the tongue at first — perhaps giving the devil his due — but this fades with time exposed to air. But the most curious thing about an otherwise quite tasty sherried malt is the sharp finish, a kind of acidic tang with touches of red chile and black pepper. Fire and brimstone? You got it.