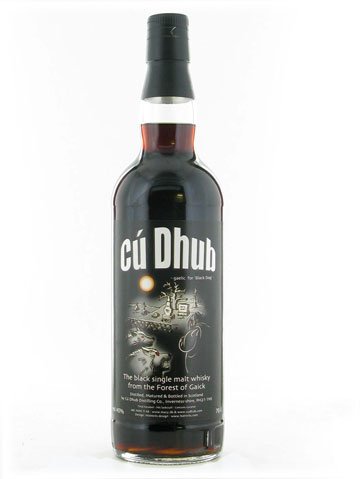 How do you turn Scotch whisky black as stout? Well, the secret isn’t as fantastical as you might have hoped: Cu Dhub is colored (heavily) with black caramel.

Cu Dhub, pronounced “kaddoo,” is actually a very loose recreation of a whisky called Loch Dhu, which was bottled for only a few years in the ’90s and managed to attain a sort of cult following during that time. Most reviews revel in how awful it is — primarily because it drew its color not from caramel but from extra-charred oak barrels, where it spent 10 years.

I’ve never tried Loch Dhu (remaining bottles cost hundreds of dollars now), but I can’t imagine that Cu Dhub tastes much like this infamous whisky, based on other coverage I’ve read. Cu Dhub is born at the small Speyside Distillery (located, yes, in Speyside), is matured for five years (presumably under heavy char), then shipped to Denmark where it is caramel colored to within an inch of its life. The resulting whisky is the color of coffee, and many of the terms used to describe it could easily apply to both drinks.

The nose is surprising. It smells mainly of simple malt, some nougat, some grain, a touch of barrel char. When compared to the dark brown color, it’s immediately cryptic.

A sip reveals a different story. A modest body reveals some initial sweetness, then a rush of burnt flavors. It’s like char and ash, but not quite wood. Almost a tone of burnt fibers and (obviously) well-reduced sugar, melted down until there’s nothing left but the carbon. The flavor is not nearly — not even remotely — as close to the cigarette ash-character that I’ve read about in Loch Dhu reviews, but the finish ends on a distinctly bitter note. Some say licorice, and that’s close. I see it more of a bitter tree bark character, something you’d encounter in an amaro or a medicinal tincture. Is there any balance here? No, not really, but as brazen curiosities go, it’s at least worth a shot to share amongst whisky enthusiast friends.