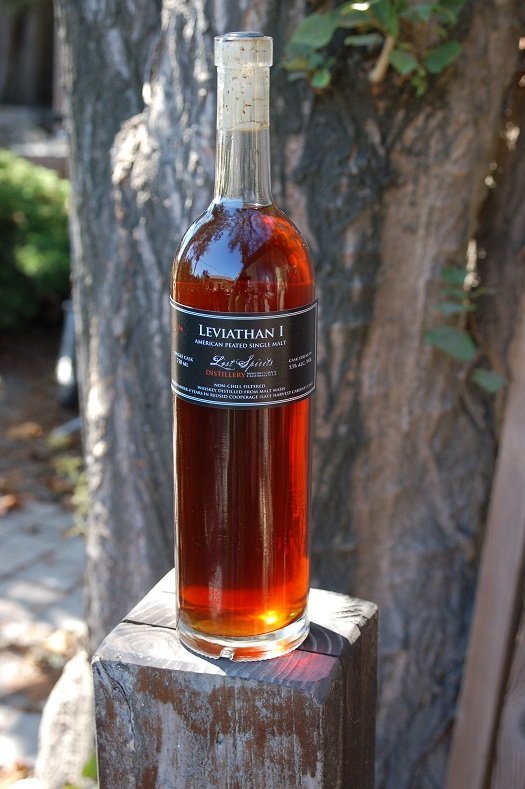 Recently we featured Lost Spirits Seascape, a peated American single malt whiskey. Now we’re back with what may be the company’s flagship dram: Leviathan I.

Leviathan is bottled as a single-barrel release of heavily-peated (110ppm phenol, or thereabouts) single malt whiskey, aged for under 4 years in casks formerly used for late-harvest Cabernet Sauvignon. The barrels are normally re-charred with a #3 char before using, but due to a fortuitous mistake, Lost Spirits accidentally over-charred Cask #3 — in addition to some additional happenstance with this release — which gives the whiskey an incredibly dark color. It is, as company owner Bryan Davis puts it, a whiskey with an “extreme profile” and will not necessarily by characteristic of the brand. Peat fans will want to snap up this particular bottling, which won’t be available for long, considering only 125 bottles were made.

Pour a glass and you’ll be stunned. Despite this being a very young spirit, the deep mahogany color makes this one of the darkest whiskeys I’ve ever seen. (Reminder: There is no artificial coloring in this spirit! That dark coffee color is completely the result of the unique barrel aging program.)

Cracking it open, you’ll of course find peat on the nose, but less than you’d think. More of a burning wood embers character than a peat bog. Sipping brings out a downright shocking range of wholly unexpected flavors, the most notable and up-front of which is a rich chocolate character — think drinking cocoa by a campfire — backed up with cinnamon, vanilla, and a little raspberry jam. The finish is long and complex — bringing up more sweetness as it fades — and only mildly hot considering its 106 proof level.

This is really a surprising whiskey and nothing like the peat bomb you might be thinking it will be.  Let it simmer in the glass, and keep sipping. This is one complicated and unexpected whiskey that almost any whiskey drinker — peat lover and peat “tolerater” alike — is going to really want to be a part of.

Want to try this whiskey for yourself? If you’re in the Bay Area, Bryan will be sampling it in person on September 5 in San Francisco and September 12 in Redwood City, both at the K&L Wine Merchants Wednesday tasting events. Drop by and tell them Drinkhacker sent you!