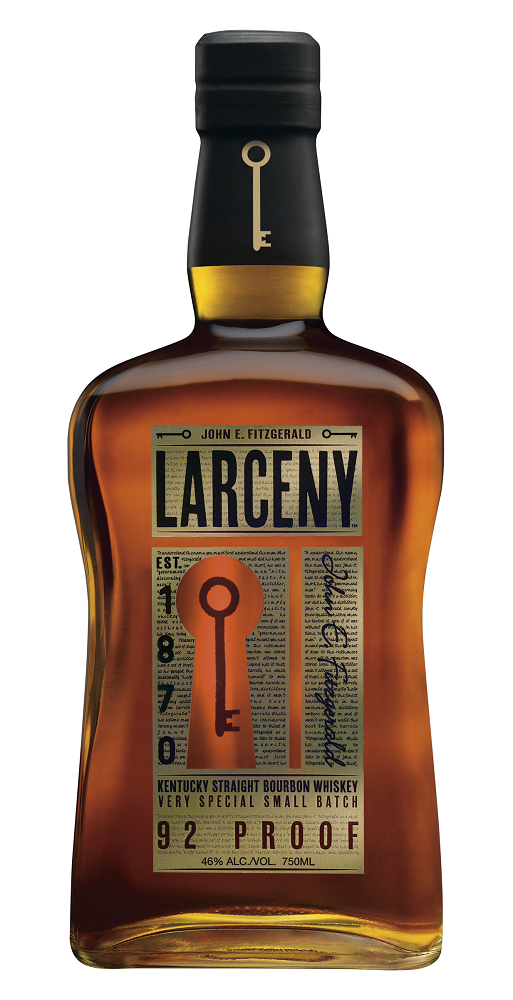 Heaven Hill has just released this new bottling, called Larceny and named in honor of John E. Fitzgerald. Who’s that? A treasury agent with “the only set of keys to the rickhouses,” he reportedly stole whiskey from the best barrels as he traipsed through the warehouses around the turn of the century. There’s a long back story of lies and half-truths about Fitzgerald — the iconic “Old Fitzgerald” brand is named after him — but I won’t delve into all of it on this post. (Chuck Cowdery has tons of info here.) Frankly he had nothing to do with the making of this whiskey.

This is a wheated Bourbon, bottled at 92 proof. No age statement, but drawn from barrels 6 to 12 years old and produced in small batches 100 (or fewer) barrels at a time.

The color is a bright amber, almost orange. The nose offers fresh-cut wood and lots of it, with traditional vanilla notes underneath that. On the tongue, lots of citrus. More wood here, with the more typical Bourbon notes of sweet, burnt sugar/caramel and vanilla coming on at the end.

I’m torn on this whiskey. It’s an easy sipper even at 92 proof but at every step the wood comes across almost like sawdust on the nose. It tastes “ready,” though not exactly young, but also a bit hoary and old at the same time. I appreciate wood in my Bourbon, but there’s something about the balance here that doesn’t quite work out the way it should.

At this price, you can try it for yourself and see what you think. Let me know.