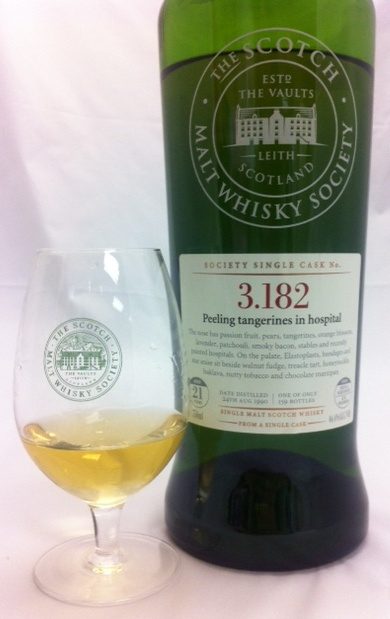 I’ve had immense respect for the Scotch Malt Whisky Society for years and have greatly enjoyed their Whisky Extravaganza tastings as well. If you’re not familiar with the SMWS, here’s how it works: The company, founded in 1983, is an independent Scotch bottler (like Duncan Taylor or Gordon & MacPhail) that works with a slightly different approach. Instead of producing whisky in bulk, it releases only single-cask bottlings, each typically netting a few hundred bottles or less of finished product. These whiskys are identified only by a code number — the number before the decimal identifies the distillery, the number after identifies the cask. Whisky 3.182 (reviewed below) is the 182nd cask that SMWS has “turned out” (dumped out and bottled) from Distillery #3.

To make things interesting, the SMWS does not identify the distillery by name, only number, although it does give you clues to help ID the distillery in its tasting notes, and the internet of course offers some handy shortcuts.

Because it works with single casks, SMWS is always putting out new spirits, with thousands of bottlings released to date. It would be impossible to keep tabs on them all, but gosh darnit we’re going to give it the old college try.

Here’s a look at the four whiskys released from SMWS in early August 2012.

SMWS Cask 3.182 – 21 year old Bowmore from Islay – Light gold. Exceptionally peaty on the nose, but the body has been mellowed with age like smoldering embers of a fire. Honey, roasted nuts, and even a touch of licorice play in the fire as you sip. Enjoyable and mellow for a highly peated whisky, with hints of orange oil on the finish. Distilled 1990, 92.8 proof, 60 bottles allocated for U.S. A- / $145

SMWS Cask 7.69 – 8 year old Longmorn from Speyside – Very pale yellow. Tons of dessert character on the nose: Vanilla cake, whipped cream, Crepes Suzette. The body doesn’t quite back that promise up. The sweetness isn’t as refined as I’d hope, with more of a tone of processed sugar and marzipan. The whisky is very young, and some of that grainy character seeps through, too. At a whopping 123.2 proof, it’s got a nice burn (but surprisingly isn’t overpowering). Distilled 2003, 150 bottles allocated for U.S. B / $85

SMWS Cask 24.122 – 16 year old Macallan from Speyside – Surprisingly light in color. Perfumed and spicy, with a nose that recalls sweet nougat sitting out in an Indian restaurant. Lots of heat on the body, with its hefty sweetness tempered by incense, nutmeg, cinnamon, and a range of oddities on the finish. (The tasting notes even mention gunpowder.) Atypical for Macallan, but curious. Distilled 1995, 106 proof, 120 bottles allocated for U.S. B+ / $120

SMWS Cask 30.68 – 10 year old Glenrothes from Speyside – Moderate amber, the darkest of the batch. Aged in a mammoth 700-liter gorda (about 3 times the size of a typical barrel). Pretty orange flower and orange peel notes on the nose. These carry over to the body, but the whisky’s heat gets in the way. Water brings out those citrus notes but also more savory character — mushrooms, wood pulp, and jasmine. Complex and enjoyable but ultimately a touch on the the young side. Distilled 2001, 121.2 proof, 120 bottles allocated for U.S. B+ / $95 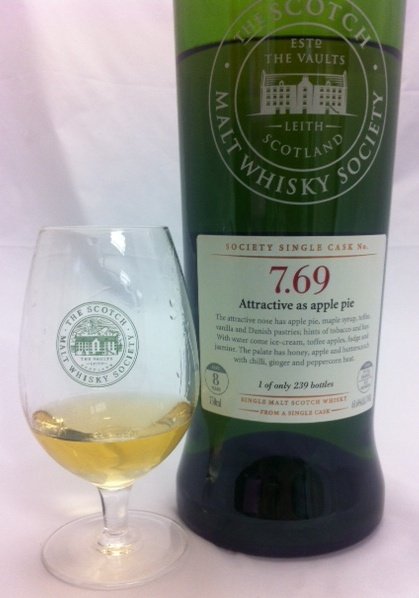