James Carville isn’t just the kingmaker behind Bill Clinton and other Democratic leaders from the last several decades, he’s now the spokesman for Maker’s Mark. Along with wife Mary Matalin, Carville is stumping for the massive Bourbon brand with a cheeky political spin, promoting “The Cocktail Party,” a party that, at last, the famously opposite-minded couple can both get behind.

Recently I spoke to the Ragin’ Cajun – after missing him in person at a Maker’s Mark event – via phone to talk whiskey, politics, and more. 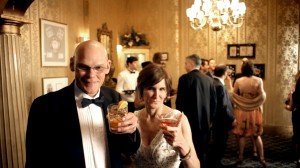 Carville’s been a fan of Maker’s since 1987, so it was a natural move, he says, to sign on for a promo gig. “I spent the first 50 years of my life not knowing what premium bourbon was. My daddy used to drink Old Crow.” Now a rabid devotee of Maker’s, he says, “I serve it all the time.”

I asked Carville about whether drinking and politics mix – after all, no aspiring leader wants to be seen as a drunk – and Carville laughed. “Of course they mix,” he giggles in his characteristic deep-Louisiana accent, “Do you think you could do politics sober? If you want to get something done together, you gotta drink together.”

Sure enough, it seems like in recent years politicians have been more open to being seen with a drink in hand. Barack Obama, in particular, seems to have few qualms with the touchy subject. Recently it was revealed that the White House now has its own home-brew operation on site, and Obama’s famous “Beer Summit” (following Henry Louis Gates’ erroneous arrest) is now a textbook example of how a bit o’ alcohol can go a long way toward mending fences – and keeping riots at bay.

Adds Carville. “Obama’s a beer man. It’s the one thing that anyone can drink. And no one’s gonna say, ‘I’m a red Burgundy guy.’”

Of course, Carville is quick to point out that Obama could do worse, that there have been many (not so) great moments in alcohol and politics. His favorite: Sargent Shriver ordering a Courvoisier in a blue-collar bar in Ohio in 1972. Did it kill his chances to win the election that year? Says Carville, “I don’t think he had much of a chance to start with.”

The incident would be vaguely echoed when Hilary Clinton – for whom Carville was consulting at the time – had a beer and a whiskey shot on the 2008 campaign trail, only to have it later revealed that she was drinking Canadian whisky and not American Bourbon. (Scandal!) For the record, Carville laughs this off: “You go into a bar and people put a drink in your hand. You don’t ask if it’s Canadian.” Hey, I’m just impressed she actually finished it.

With election season kicking into gear, Carville is calling on politicians to put down the beer and pick up the Bourbon (presumably a Maker’s Mark). “That’s the great American drink: Bourbon,” he says. “These guys should kick it up a notch.”