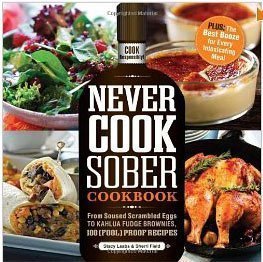 I’m the first one to agree with the concept of using alcohol — beer, wine, spirits — in your cooking, but a standalone cookbook devoted to boozing up otherwise average recipes is just a mistake from the start.

This slim volume goes for kitsch, with dishes like “Sassy Salmon in Champagne Sauce,” “Vini Vidi Vici Vodka Caesar Salad,” and — ahem — “Mix Drinks Like a Pro Whiskey Steak and Cheese Sandwich.” The bar in your cookbook isn’t exactly high when it includes a PB&J sandwich with flavored vodka mixed into it and, seriously, jello shots. The latter are included in the “breakfast” section. The book’s recipe for a pulled pork sandwich calls for prepackaged pulled pork and barbecue sauce. (And bourbon.)

Interspersed with banal facts about alcohol and tired quotes on the same topic, the book isn’t just unfunny, it’s also a little wrongheaded when it comes to how alcohol gets used in most recipes. The book includes icons to indicate the “alcohol content” of each dish. From one jug (one shot or less) to six (five shots or more), the ratings bizarrely don’t take into account whether the recipe is cooked or not — thus removing most of the alcohol from the dish. Come on, people.