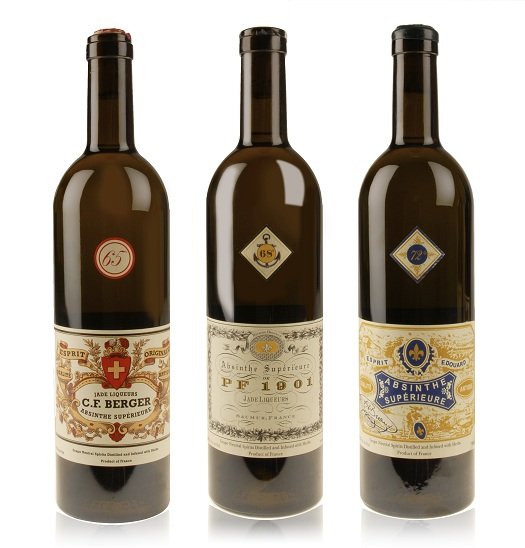 Absinthe may have been the fastest rising and most rapidly falling fad in booze since Zima (when’s the last time you had a glass?), but let’s not forget our heritage: Absinthe is a spirit of critical import to the history of the (drinking) world, sullied alas by Americans jonesing for modern-day recreations of the stuff after a century of it being banned here. Can’t blame ’em, but now there’s a flood of absinthe on the market, some good, some not.

Fortunately there are folks like Ted Breaux, who brought Lucid into the U.S. in 2007 as (arguably) the first post-ban absinthe in the U.S, who is now bringing high-end absinthe into the country in the form of three European products released there in 2005. Jade C. F. Berger, Jade 1901, and Jade Esprit Edouard aren’t cheap, but they’re meant to accurately recreate the character of three famed 19th century absinthes that have long been unavailable (but which Breaux has stocks of), right down to the labels. They join Nouvelle Orleans in the company’s “Vintage” line.

Now I’ve never tried the original spirits upon which these are based, so these reviews are based only on their merits (and vs. other modern absinthes). Thoughts follow. (Material in quotes is material provided by Jade’s creators at Viridian Spirits.)

Jade C. F. Berger Absinthe Superieure – “C. F. Berger absinthe verte, originally produced by C. F. Berger in Couvet, Switzerland. Considered one of the premier absinthes of the 19th century, it is in the Swiss style, characterized by a bold bouquet; full-bodied, rounded mouthfeel; and distinct herbal notes that linger on the palate.” The lightest in color of this trio, in the high-test world of absinthe it’s practically easygoing. Light lemon and lime notes, with a solid anise slug backing it up. I wouldn’t describe it as particularly herbal, but rather fruity and simple instead, albeit with a lasting finish. Minimal louche. I actually prefer it with just water, no sugar. 130 proof. B+ [BUY IT NOW FROM DRIZLY]

Jade 1901 Absinthe Superieure “is a tribute to the best known and most widely sampled pre-ban absinthe, which was originally produced around 1901, but then virtually wiped out when the original distillery in Pontarlier was destroyed by fire. Jade 1901 is a classic absinthe, balanced and crisp, with an appetizing herbal aroma and a smooth, lingering aftertaste.” Very mild. With sugar and water, it’s almost like a pastis, pleasant, refreshing, and easygoing. After awhile, I found the finish turning a touch bitter, like a dried herbal character. Lovely louche. 136 proof. B [BUY IT NOW FROM DRIZLY]

Jade Esprit Edouard Absinthe Superieure “is a faithful reproduction of one of the most famous and highly regarded Belle Époque absinthes.  A century after the demise of the original, Breaux examined perfectly preserved examples of the renowned spirit to develop a contemporary recipe that captures the original’s delicate tint, refined texture, and exquisitely smooth flavor.” A chartreuse monster, one sip straight nearly knocked me off the couch. Don’t skimp on the water here, for when it’s prepared correctly this absinthe offers a unique earthiness, echoing the aromas and flavors of the forest. Unique, you’ll find citrus notes, moderately strong floral characteristics, and a lasting, bittersweet finish. Beautiful, iridescent yellow louche. The best of this bunch, and at a blazing 144 proof. A- [BUY IT NOW FROM DRIZLY]